You are not allowed to read this blog 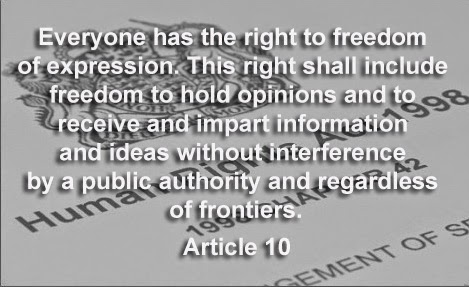 I've written about different things and different people, but surprisingly for a blog (which, let's face it, is pretty much the archetype of vanity publishing) I've never written anything about me.

Yesterday afternoon as I was debating whether to continue watching some lame James Caan movie about midget submarines, I was disturbed by a police officer peering through my lounge window. I do live on the ground floor, so not as surprising as you may have imagined. I went to the door and there were two constables there. The first thing they said was that there was nothing to be worried about, they just wanted to come in for a chat. Not something that has ever happened to me before, but I showed them in and sat them on the sofa.

They wondered if I was the Michael Abberton on Twitter and I said yes. Then they said this was in relation to a complaint that had been made by a certain political party in relation to tweets I had published about them and one tweet in particular which talked about ten reasons to vote for them. The PC wanted to know if I had made that poster. I explained that I hadn't but it had been doing the rounds on Twitter for a while, and so I had decided to see if these claims could be verified.

The police explained that I hadn't broken any law - there was no charge to answer and it really wasn't a police matter.

They asked me to 'take it down' but I said I couldn't do that as it had already been retweeted and appropriated, copied, many times and I no longer had any control of it (I had to explain to one of the officers what Twitter was and how it worked). They said that they couldn't force me to take it down anyway.

I asked if I could tweet about the visit. The straight answer was 'no', as this might appear prejudicial in light of the upcoming election and the police must appear to remain neutral. But they couldn't stop me from doing so, as I had Freedom of Speech. Incredulously, I said, "...but you must realise how this looks!" One shrugged, the other looked embarrassed.

As they were getting up to leave I asked for clarification - was this in relation to possible copyright infringement - and they were very clear on that point. It wasn't, and they didn't see how it could be. And even if it were, again it would not be a police but a civil matter.

I'd like to be absolutely clear - the police officers were extremely professional and polite and I couldn't fault their behaviour in any way. But it wasn't until after they left that I questioned why they had visited me in the first place. A complaint had been made but with no legal basis. Not a police matter. So why did they come to my home in the middle of a Saturday afternoon? Also, seeing as my profile doesn't have my location - how did they know my address, or even the town I live in?

About fifteen minutes after they left I received a threatening tweet from a party member I had had an exchange with earlier in the day. Though appearing to be no more than a party supporter, he seemed to know that the police had been involved. I copied the tweet and sent it to the police.

I contacted some people I'd had exchanges with involving this party. One of them put me in touch with a solicitor and a journalist and advised that I contact my MP, which I've done. And whilst acknowledging the fact that the police had no right to censure my posts, in order to show goodwill I removed all instances of the poster where I'd sent it @someone, and have not tweeted about the visit or about that political party since.

Nevertheless, the story has gotten out and it seems people do feel (rightly) outraged by it.

If I had been abusive in any way, if I had been dishonest in any respect or if any of the sources had been fake rather than official party links, I could in some way understand it. But all I had done is promote the party policy using links to their own sources - no editorialising, no commenting. And in fairness highlighted those allegations I could find no evidence for. One of the sources was their current manifesto!

Why would a political party, so close to an election, seek to stop people finding out what their policies are or their past voting record? And is it not a matter for concern that a political party would seek to silence dissent and debate in such a manner?
Posted by Mick at 17:41