UKIP is not Racist. 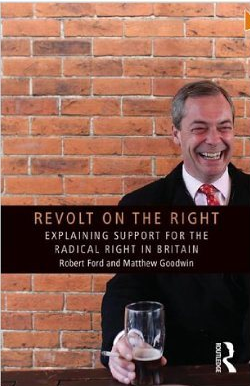 UKIP is not racist.
You might be surprised to see me writing that but actually I believe it to be true. I said is rather than are on purpose - we have seen that, despite their vetting procedure, a number of UKIP candidates have voiced racist views. You only need to go to Twitter to see what the views of Farage’s People’s Army actually are. UKIP is aware of this, and though in the past they deliberately courted the BNP vote, they have made concerted efforts to distance themselves from open racism and have taken efforts to eliminate these sections within the party.

Not Racism - Cynical Populism
The first thing that leads me to this conclusion is research into the history of the party. I thoroughly recommend Revolt on the Right: Explaining Support for the Radical Right in Britain (Robert Ford & M.J.Goodwin, Routledge, 2014). What follows is mostly from there. The book is also recommended by figures within UKIP – but I suspect they haven’t read it!

When the party was founded it was little more than a one issue pressure group, with the ultimate end of getting the UK out of the EU. If elected to office, they intended to immediately stand down and dissolve the party once their goal was achieved, and they had no intention of standing against euro-sceptic Tories.

However as the party gained in popularity the original idealism and even the ideology was put aside. The Kilroy era showed that with money, publicity and drive (not forgetting Farage too at this point) it was possible for them to advance from the fringe into the mainstream, take and hold office. And for this, they needed policies to get more votes and widen their target demographic. Nuttall had the idea of going after the ‘low-hanging fruit’ of disaffected traditional Labour supporters and blue-collar workers, and targeting the fears over immigration in particular.

In elections after 2000 Tories and BNP both chose immigration as one of their targets, though both coming from ideological standpoints, and with the Tories, it was just one amongst a raft of domestic policies they were campaigning on. The only ideology that governed UKIP however was populism – their sole reason for selecting this target was to cynically exploit the issue in order to get votes. This is why in particular the myth they created and fed had no basis in reality – they played directly to the audience, with a massive poster campaign directly into their target areas.

Analysis of the 2013 council elections revealed that the greatest upswing of UKIP support was coming from the deprived, working class and poorly qualified people. It made sense then to make this demographic the target and immigration the single issue for the 2014 campaign.

And it seemed to pay off. UKIP managed to capture virtually all of the BNP vote, ending them as a political party. And whilst they were virtually wiped out of every major city in the UK, they gained councillors and MEPs in traditional Labour heartlands. But Ford and Goodwin argue that contrary to the popular conception, UKIP wasn’t ‘widening their support base, but deepening it.’

From the Guardian, UKIP supporters have the least interest in other countries and cultures, don’t regularly try food from other cultures and don’t use social media.


It is in fact entirely accurate to depict UKIP as a throwback party, looking back nostalgically to a time of traditional values and homogeneity, of establishment and pride in Britain. This of course is a sepia-tinged fantasy that actually never existed. But UKIP is fixed in time to before we joined the EU in 1973 – so of course most of the support is going to come from people who can actually remember it. But they are remembering the fantasy – not the strikes, the height of the Troubles, the Cod War, and then later the Three-Day Week, power cuts, bread rationing, unemployment hitting 1m for the first time since the 1930s…

Targeting Romanians
As I pointed out in an earlier post, the manifesto deliberately misquotes a FOI report from the Met about numbers of arrests of foreign nationals, Farage’s open letter of excuses after his disastrous LBC interview makes the same errors. When challenged on these inaccuracies, Farage said he merely ‘simplified’ the report. I’ll let you judge that for yourself.

It’s not just that the report was distorted, it’s the way it was distorted. The figures all go back to the five years prior to 2012, yet the manifesto stated, ’28,000 Romanians are held for crimes in London.’

It concentrates on Romanians and says that they come second for the levels of serious crime – they don’t, they come third. And the biggest group by far with more than twice the number of arrests for serious crime are the Polish (11,103); Jamaica comes second (5,635); Romania a close third (5,393). If this was about racism, then why pick on the third group on the list, why not the Poles and Jamaicans?

The reason why Farage picked on Romanians and Bulgarians is that these nations became eligible for Free Movement this year, and Farage wanted to demonstrate that whilst these countries had been admitted to the EU, they weren’t ready, and they could now flood into the UK. UKIP had already put all their money on this actually happening, to supply them with hard data they would need to justify their campaign of fear.

From the figures released before the election we now know they didn’t come, and in fact, fewer Romanians and Bulgarians came here than before the ‘borders were opened’. The arrest rate for these nationalities has also significantly dropped. But UKIP had already sent the manifesto to the printers – they were committed. And the facts don’t matter – the myth had been fixed in the consciousness of the voters. Now UKIP can set the agenda – Labour and the Tories will not challenge the myth, but will dance to UKIP’s tune.

UKIP may not be ideologically racist – as its only ideology is populism and the pursuit of power for its own sake – but the membership and candidature is undeniably extreme right-wing, and the ultimate result of exploiting fears about immigration and targeting a particular group for blame and derision is racism.