UKIP - the 'acceptable' face of neo-nazism in the UK 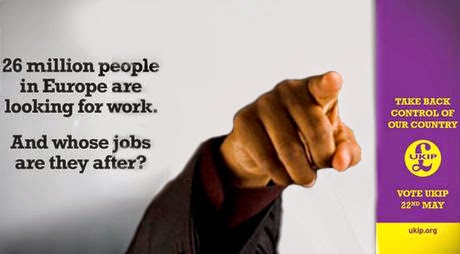 This is not one of the UKIP posters that has appeared on billboards across the country over the past week. This is a thought experiment. What if the billboards looked like this?

If the billboard had any vestige of truth, it would be minorities who would suffer from it. New unqualified immigrants would compete in the same job markets and industries as previous immigrants, and naturalized citizens. It would be their jobs under threat, not the white male demographic. In fact, women would suffer more as there are more women in the domestic and service industries. Yet these are not the images used. Why?

Not only is the premise of the poster based on a lie, it is something that we have seen before. The message is purely designed to incite fear of 'the foreigner'. It uses a message, and even iconography that has been used over and again by fascists ever since the 1940's.

I think that the danger posed by UKIP cannot be overstated. Their vagueness on policy makes them appear a single-issue party, but what I fear is that they will gain popular support from people almost entirely ignorant of the party policy or the interests they represent.

Germany between the wars was in a state of economic collapse, misgoverned without doubt, the economy destroyed by reparations and sanctions on industry and trade. Unemployment and deprivation were rife. National Socialism stood up for the 'true, historic Deutsche Volk', the 'ordinary hard working man in the street'. They were being held in a yoke by the rest of Europe, and the money and jobs seemed to be being taken by immigrants and Jews. Unite behind a common flag, for true patriotism, against a common enemy.

The parallels to the rise of  UKIP are there for all to see. The views of some of their EU candidates seem to differ very slightly if at all from their historic forebears; their appeal and tactics, and as we have seen, their propaganda, is precisely the same.

One ethnic group / nationality has been made a specific target - Romanians. The manifesto gives fake statistics about the number of Romanians imprisoned for serious crimes and there is the oft-quoted favourite lie of Farage that the entire Romanian population was going to invade. Romanians were the only nationality mentioned in their party political broadcast. And when Farage chose to launch his poster campaign, he did it in Sheffield - was it a coincidence that there had been recent media reports of tension with Romanian immigrants in the city?

At the top of the pile is the leader, the one person identified with the party. Who can name a single other senior UKIP member? And this is carried forward into all their election publicity, in a way not seen with any of the major political parties. 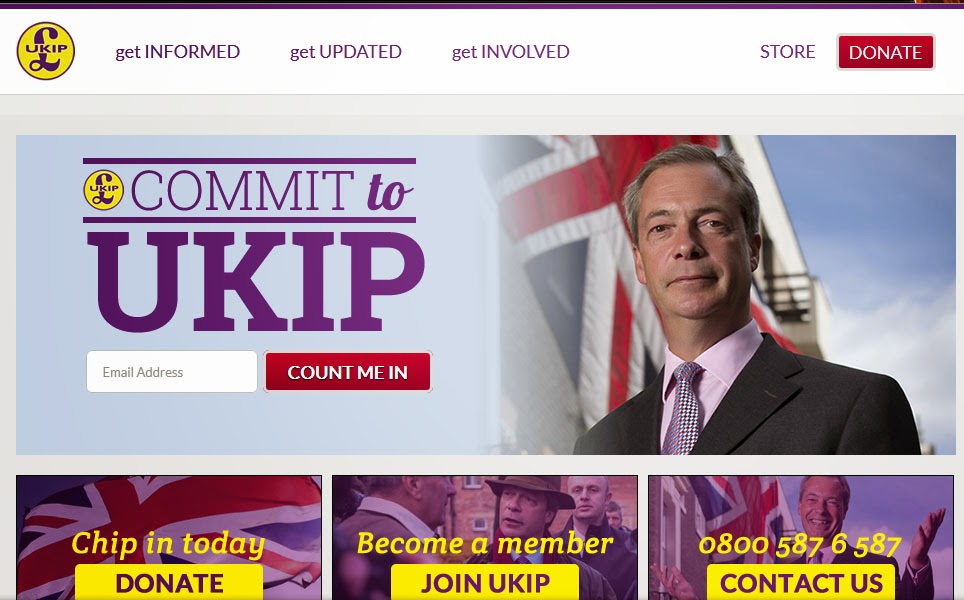 What people often forget is that Hitler was not dependent on the Brownshirts or Stormtroopers to win the election that opened the doorway to his seizing total power. There was a lot of support within the general public, naive though most of them probably were. Same again, those UKIP members and candidates I've debated with on Twitter show a shocking ignorance of what the EU is or does, or even of the policies of their own party. They instead are focussing on the hysteria, the myth of mass immigration, and more frightening perhaps, what they call 'patriotism'.

When the 'builder' in one of the election posters turned out to be an EU immigrant, one candidate challenged on it claimed that citizens of the Republic of Ireland were not 'foreign' as this is stipulated in the 1949 act (which concerned recognition of the Republic, no longer as a domain or part of the Commonwealth etc.) and so argued that all the Irish are in fact UK citizens! When I fact-checked the manifesto and asked other members to substantiate any of it, some denied that there was a manifesto and I must have made it up (I sent them the link - it's on their website!).

The belief in the party and their leader is fanatical for some. Any reasonable question or challenge over the actual facts is met with anger, insults, threats and hate. It's true that it seems most of Farage's support seems to come from retired middle-class and disillusioned right-wing Tories. His attempts at rooting out former NF and BNP members from the party (forced after previous revelations of his candidates' beliefs) has rankled some in the far right - but there are still those who have recognised a common cause and so will support UKIP as its popularity rises.

What we must absolutely not do is to see UKIP as some kind of farce, as a joke. The threat is very real and we have to take it seriously, to stop history repeating itself. The key to this is information - getting people past the propaganda to the truth, about the EU, immigration and what UKIP policies really are.