The Great UKIP Victory…according to the BBC. 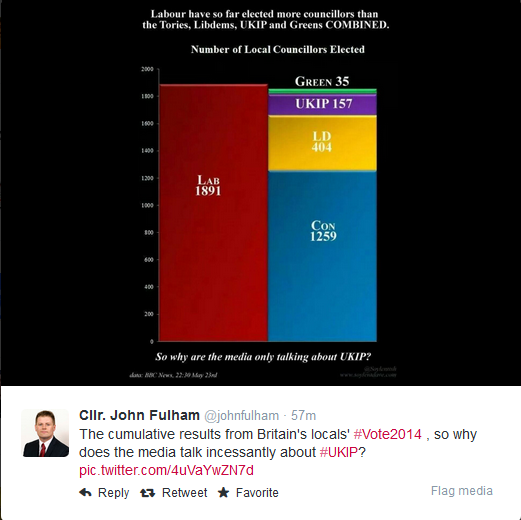 Last Thursday elections were held in some local authorities in the UK. Labour won an additional 339 seats, meaning they now hold more seats than all other parties and independents combined. The Conservatives lost 172 seats, the Libdems 254, so whilst some councils went to No Overall Control, Labour gained control of an additional 8 councils including Cambridge, in a landslide.

UKIP, whose chances had been bolstered by a multi-million pound advertising campaign and media ubiquity of its Leader Nigel Farage, lost incumbents all over the country, being virtually wiped out in every major city including London, where all UKIP councillors were shown the door. Nevertheless they gained 128 seats, which represents a drop in their share of the vote of 6% when compared to the same time last year. 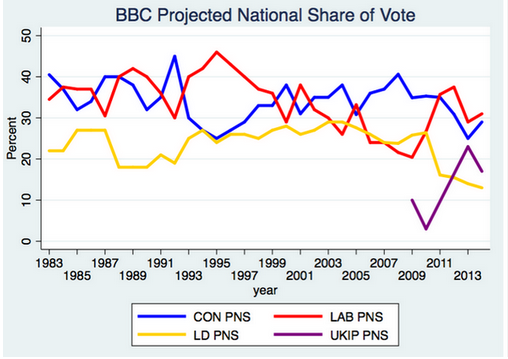 But this isn’t the story being reported by some of the newspapers – some who have declared political affiliations and also probably went to print before all the results were in. But the BBC, supposed to be free from political bias and having the advantage of 24 hour rolling news gathering and production, ran the story that this displayed an enormous victory for UKIP, a ‘political earthquake’, ‘real four party politics’ – even going so far as asking the Chancellor of the Exchequer, live on air in the Today Programme on Radio 4, whether the Tories would now be approaching UKIP for a coalition deal in next year’s general election.

Whether Farage could be Deputy PM. As a serious question.

This is a party with no MPs, who lost almost every seat they stood for, declining in vote share, winning just over 4% of seats.

The day before the BBC were pushing their particular version of reality, in statements like this one –
The Tories lose 12 councils while Labour added just 5, but UKIP won an additional 128 seats.

The BBC switched the metric half way through – that is not balanced reporting. The same statement should read:
The Tories lose 12 councils while Labour added just 5, but UKIP gained none.
Or:
The Tories lost 172 seats, Libdems 254, mostly to Labour who gained 334 seats nationwide. UKIP also gained 128, indicative of a Tory protest vote in the regions.

The ‘landslide’ and ‘revolution’ stories continue – yet with 4.4% of seats, UKIP hasn’t won as many as the BNP did in 2009 – 6.2%. Yet I don’t recall John Humphrys asking whether Nick Griffin should be deputy PM.

It is difficult to see what the BBC editorial agenda is with this. Recently it seems that they have been regarding politics more as Light Entertainment than Current Affairs. The Marr Show is some kind of cross between the BBC News breakfast programme and the old Pebble Mill at One. Question Time invites more cheeky chappies, personalities, comedians and polemicists than academics or politicians, Farage appearing on that programme more than most, going almost back-to-back with appearances on Have I Got News for You. Andrew Neill’s programmes are peppered with cartoon graphics, clever quips and 5 min talking head shorts by celebs.

Perhaps in this media world where ideology has given way to populism; policy to personality; fear over facts – ratings have become the most important factor for a BBC desperately in danger of losing both its credibility and its charter.


(Thanks to @SimonGosden and @fleetstreetfox  - other refs. see Guardian and BBC websites)
Posted by Mick at 13:08