Corbynmania - good for Labour but keep it Green 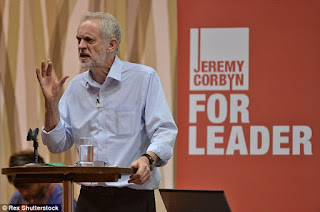 Harriet Harman announced the other day that there will be an investigation into all those new Labour members or supporters recently joined with the purpose of participating in the leadership election. It does seem a bit suspect that the vetting seems entirely arbitrary, and as only Corbyn supporters have been accused of ‘entryism’; it seems that the idea might be to ensure that a more ‘suitable’ candidate is elected.

There may be a few people who have paid the £3 to become supporters to cause mischief but I suspect that there wouldn’t be enough to swing any result.  What there may be a good deal of however is former Labour supporters coming back to the party, having been members of other parties or groups, such as TUSC or the Green Party. If they have truly given up their membership of other parties, then is this a valid criterion to use to establish whether they are authentic Labour supporters?

Entryism is a strange accusation to make. When Militant Tendency joined the Labour Party in order to subvert and shift the party to the left, it was a deliberate campaign (that also then found some support from within the party itself). Can thousands of individual supporters and union members, once alienated by the party but now finding a true representative in Corbyn, be accused of such a campaign?

It is also unfortunately possible that Harman’s campaign, even if it fails to weed out many Corbyn supporters, could be used after the vote to discredit and invalidate the result. I might be being cynical and distrusting of the Labour exec, but then I owe them no loyalty and it certainly wouldn’t be a surprising move to make.

Confusingly, it is true that an official release from the Green Party said that members could pay the £3 to be Labour supporters and remain Greens - the Labour constitution does not recognize these ‘supporters’ as members, and so on that technicality, it would not be in breach of the Green Party constitution. However, there are members who are already preparing to have this corrected at conference, and I would support such a move. Green Party members should have no part to play in the internal affairs of another party – and those who do, should resign their Green Party membership and join that party as full members.

So for my part, why should I take interest in this at all? I have supported and promoted Corbyn’s campaign on social media, simply because he is the only alternative candidate to the red tory and blairite factions, and would bring the party back to its roots and core supporters. But I have no intention of leaving the Green Party. Whilst a lot of Corbyn’s policies reflect those of the Greens, they simply don’t go far enough especially when we need to be moving now to a post-capitalist economy – the only way to effectively combat and reduce the impacts of climate change. It is too late for even a more equitable socialist economy to effect the kind of change necessary, whilst it is still based on production, capital and growth.