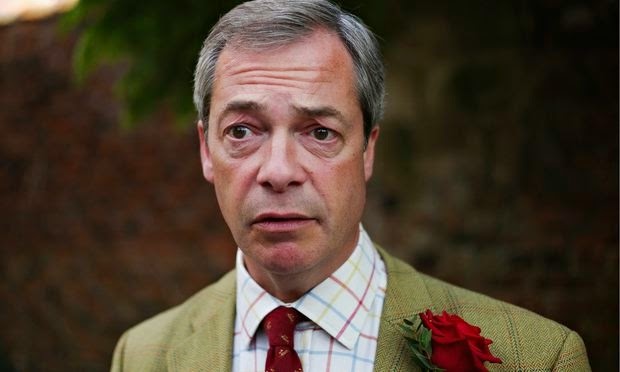 I was going to blog this week about UKIP as a cult, but then I kind of got pre-empted by a somewhat excellent article in the Torygraph (I know – hold your nose – make sure you kill all the cookies – but it’s worth it).

I might come back to that theme at a later date.

No, this is Nigel’s Septimana horribilis, as UKIP crashed from one disaster to the next.

It started when veteran DJ Mike Read released the UKIP Calypso. I won’t link that here for two reasons – one, because it was awful; second, as Read asked after just one day that the track be withdrawn. Apart from lauding UKIP policies in a series of terrible rhymes, it was derogatory to immigrants and asylum seekers, and delivered in a faux Jamaican accent.

UKIP loved it, Farage defended it, saying that it should be promoted to get to number 1 in the charts. Twenty pence out of every 79p would go straight into UKIP’s coffers. People started buying it. One on twitter said that it should be the new national anthem… he was joking, right?

The reaction was immediate. It was accused of being offensive and racist, the accent being the equivalent of black face. What was once perhaps acceptable, as in the minstrel shows of old, Jim Davidson’s Chalky White character and seventies sitcom Love thy Neighbour are now cringeworthy cultural relics, rightly consigned to the history of race relations in this country. What this calypso was, at face value, was a stumbling zombie of that culture – made all the more remarkable given the anti-migrant lyrics. 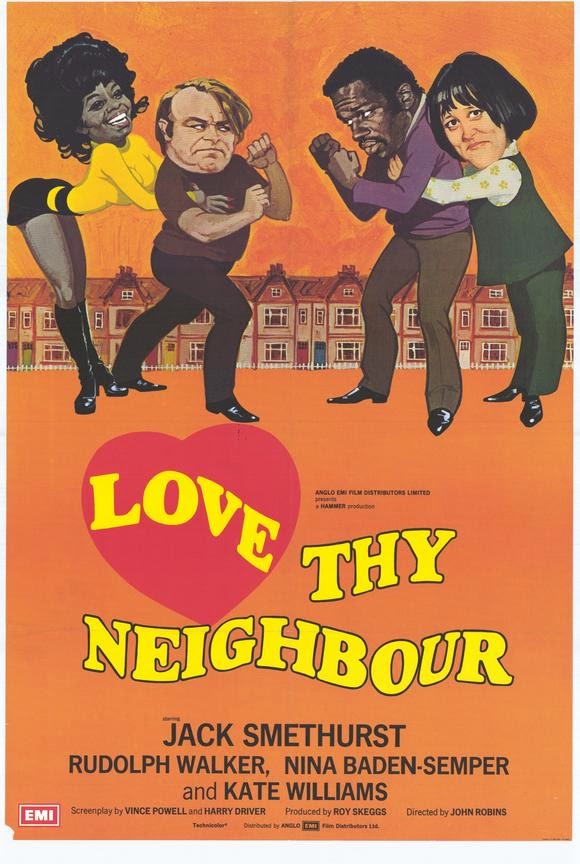 A campaign began to promote Relax by Frankie Goes to Hollywood, as Read had famously banned it from his show, UKIP’s reputation for homophobia, and Farage’s recent outspoken bigotry against HIV positive people and AIDS sufferers.

A petition was started to remove Read from his position at the BBC.

So the following day Read asked for the track to be withdrawn, apologising for any offence. UKIP issued a statement saying that the concocted offence over the track had cost the Red Cross to lose their share of the profits… but they said almost immediately that they had never been approached and would be unable to accept the donation in any event as the song was overtly political and:

…the Red Cross has a proud history of helping refugees and asylum seekers who are negatively referred to in the lyrics.

A stinging rebuke from a universally recognised and respected organisation, committed to neutrality, human rights and humanitarian action. And what looks like a hurried attempt at justification through a charity donation that never existed. 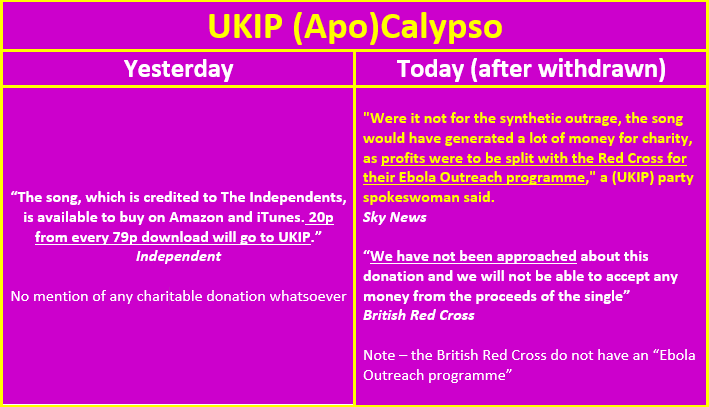 Almost simultaneously, stories started to come out about a deal that Farage had brokered to save UKIP’s Eurosceptic grouping in the EU. Deals with an extreme right-wing Polish party. This was denied as rumour and falsehood. UKIP’s spokesman Winston McKenzie, on Newsnight to defend the Calypso (why did they send a black spokesman…?) -  and doing so in perhaps the most bizarre and uncontrolled media appearance ever by the representative of a political party – when challenged, denied it and called it another ‘smear’.

Well, in fact, it was true. Farage welcomed Polish MEP for the Polish Congress of the New Right (KNP), Robert Iwaszkiewicz into the EDP.

The KNP is known for extreme views – a party so extreme that Marine Le Pen would have nothing to do with them. Their leader Janusz Korwin-Mikke was expelled from the parliament for using the n-word on the floor of the chamber. He is a holocaust denier, praises Hitler’s economic policies and is a misogynist to boot, believing that ‘women are too stupid to vote’. Other Polish parties and members of the Polish community in the UK expressed dismay – the party is infamous for its use of terms such as ‘communist jews’ in its campaign literature. Iwaszkiewicz has been quoted himself making ‘jokes’ about brutalising his children and domestic violence.

This was immediately condemned from all sides, notably the Boardof Deputies of British Jews.

Even the Murdoch press was unrestrained in its criticism of UKIP.

Farage defended him. Then the following day - said he’d never met him.

Paul Nuttall, the deputy leader called it ‘realpolitik’ when challenged on the fact that UKIP denies membership to BNP members, yet the KNP were far worse.

Other apologists said that UKIP wasn’t supporting the whole party, it was just one MEP, and not all their policies – which falls down immediately as no defence.

"If I could be blackmailed with positions in the Parliament, then I would have taken Nigel Farage’s offer to become our groups Vice-Chairman, as he offered me his seat"

And, of this position:
"Then I would have been able to attend Presidential conferences, to sit at the same table as Schulz, Weber and other leading politicians of the European Parliament. I would have had a prestigious status..."

So far from it being a deal of convenience, UKIP has enabled a far-right holocaust-denying party to get to the top table, greatly increasing their presence and influence.

Given the views of the KPD, surely the suitability of any presence by UKIP at upcoming Remembrance Day events must be called into question. 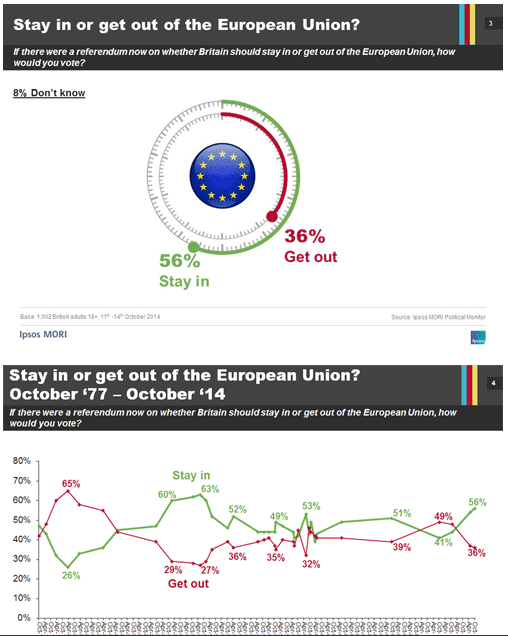 So it would appear that UKIP in fact are still a minority party, lost the argument before it has even begun. But we have learned more about UKIP this week. They still have no idea when it comes to running a political campaign, managing publicity or keeping their senior members in check. They are completely unprincipled when it comes to securing funding from whatever source.

Both the calypso and the alliance with the KNP show the mask has slipped, say some. But their performance so far this week has been so shambolic as to reveal more incompetence than malice.

But has any of this shaken the party faithful, whom as I write this are leaving all kinds of vile abuse on the twitter account of the British Red Cross?

I posted the blog and went to bed, posting the Calypso graphic above on Twitter. Overnight it went nuts and this morning I was trending in the UK and then London. It's now been retweeted over 1,100 times with an estimated reach of over a hundred times that number. 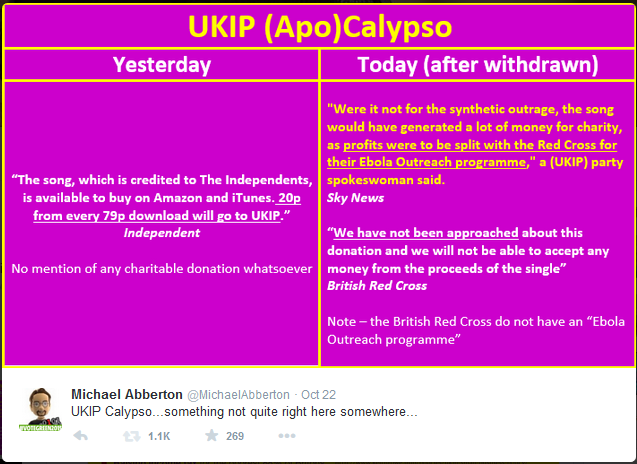 Things came to a head when, after spotting abuse directed at The British Red Cross by senior UKIP members, I retweeted it saying that with their disrespect of this institution UKIP should not be invited to remembrance day events - resulting in this tweet from their Deputy Leader: 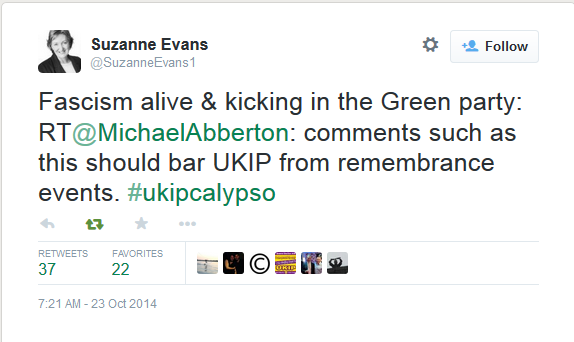 The Calypso tweet got more retweets and favourites than the tweet that UKIP tries to get me arrested for - and it's still running. UKIP just doesn't know when to stop digging.