UKIP - time to Stand Up 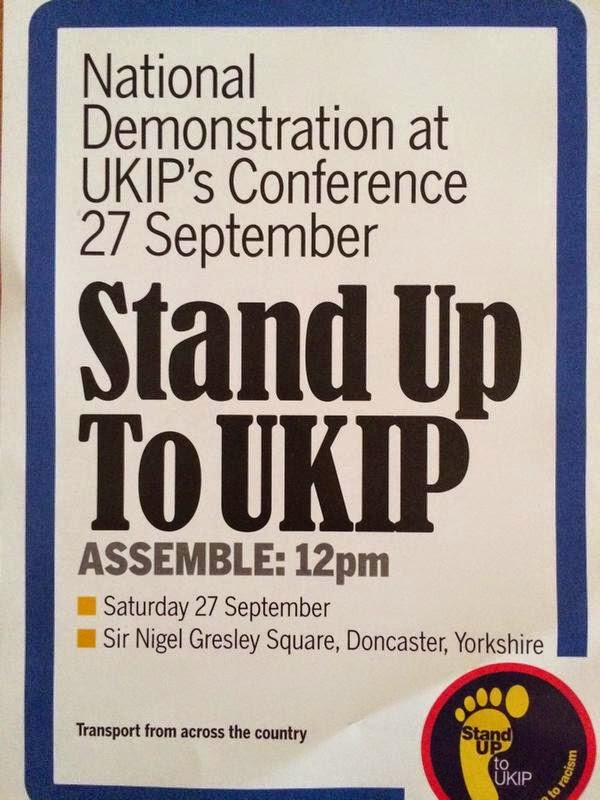 Next weekend, UKIP will hold its party conference in Doncaster. Preparations are being made all over the country for people to attend – but most of these people aren’t UKIP party members. Like me, they’ll be going to join a protest, to let the party members know that they are not in the majority and will not go unopposed. One of the intentions will be to expose UKIP for what they are, perhaps strangely, to help publicise UKIP policies.
We won’t be going to catch a glimpse of Farage, the everyman celebrity politician – what we really want to see is the new manifesto he promised.

Back in May this year, UKIP had the police come to my house in what can only be seen as an attempt to intimidate me into silence on social media. My sin in their eyes was not an ad hominem against their glorious leader nor any of the faithful. All I did was add links to a poster outlining UKIP policies that someone else had made. The links were all official UKIP websites, so that people could fact-check it for themselves. I even highlighted those policy claims that could not be substantiated.

Why would a political party want to hide its policies? Amongst the sources linked were the website of their then Small Business Tsar and now MEP Amjad Bashir; that of their publicity officer and now failed PCC candidate Keith Rowe, as well as the main UKIP website. The week following the tweet going viral Mr. Bashir changed his webpage, and Mr. Rowe’s pages were archived. The policies these men were campaigning on were simply removed from sight.

In the aftermath I found that people simply didn't believe that these were real UKIP policies. I ended up linking the new shiny campaign manifestos to many UKIP supporters who had no idea what they were actually signing up to. On more than one occasion I was accused of writing the manifestos myself!

The single issue however that ran the campaign and still remains is immigration. Since UKIP has been exploiting this fear to great effect, we have coincidentally seen the rise of new extreme right-wing and racist organisations. Accusations of racism have been made against the rank and file of UKIP for some time, but over the past few months an MEP described the wife of a party worker as ‘a ting-tong from somewhere’, and other senior members of the party have (perhaps innocently) retweeted and favourited tweeted materials from extremist groups in the UK and USA.

In response, local groups of people all over the country have been organising to Stand Up to UKIP. Partly funded by trade union donations, the movement is gaining strength and has organised the demonstration at the UKIP conference.

I attended a local meeting last week to offer my support and get more information. As the venue was full people literally had to Stand Up at the back. One of the speakers mentioned my case and so I identified myself and said my piece. It was a good-spirited gathering of all ages and professions.

One of the main ideas was to publicise actual UKIP policies as much as possible. This would seem odd for any political organisation to do in opposition to a political party. But, particularly the disaffected or protest Labour voters Farage is so keen to attract would be horrified if they knew that they were voting for a party much more extreme in every respect than the Tories they have loathed for generations.

As I left the meeting and walked into the street, I received two threats of violence on Twitter, within seconds of each other, from people claiming to be UKIP supporters. I banned and reported the users of course (though pointless - one was a brand-new account).

It seems that some people still don’t want our help in spreading UKIP’s message.