Criticising UKIP is 'siding with the Taliban? 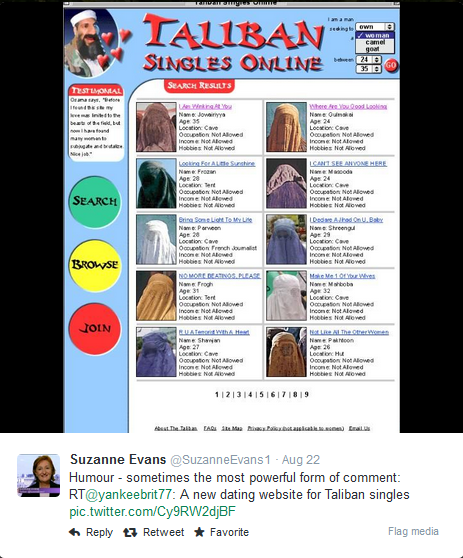 What would you call something that attacks people based on culture and tradition, their lifestyle, portraying them with over-emphasised facial features? Would that be racist? Or ‘humour’?

UKIP deputy leader Suzanne Evans would go with the latter definition. Last week she retweeted a spoof screenshot of a ‘Taliban dating site’. It shows a distorted picture of a big-nosed bearded man in the top left, has options to choose women, camels or goats, and shows pictures of women wearing the burkha, who live in caves or tents.

Moreover it was retweeted from an account that contains some of the most extreme racist and offensive content imaginable, including a photoshopped picture of what is claimed to be a young naked ‘Christian woman’ having her throat cut by a gang of ‘islamist’ men, with the caption ‘Ah, the religion of peace’. Other tweets follow the ‘white genocide’ and ‘anti-racist is a code word for anti-white’ themes common to white supremacist sites in the US, adopted here in the UK by elements of the EDL and race-hate groups.

Another element of this ‘humour’ is that one of the women in the picture is described as being a ‘French Journalist’. This may be a reference to Belgian Joanie de Rijke, was captured and raped by the Taliban in 2008, later vilified by right-wing parties in the Netherlands and elsewhere for her attitude to her captors after she was ransomed and released. It may also reference British Journalist Yvonne Ridley who converted to Islam after her release.

Bearing this in mind, why is the deputy leader of UKIP still defending her tweet, and going beyond that to claim that people criticising the post are ‘siding with the Taliban’, or that she was doing this off the back of writing a UKIP pamphlet where she wanted to emphasise the rights of women?

She claims in her article (published on the extreme right-wing site Breitbart) that terms like ‘racist’ and ‘offence’ are too often bandied about in some kind of ‘leftist witch-hunt’ which prevents people from speaking out about issues if they are ‘the wrong colour’. Is this the same sentiment supported by the originator of her tweet, that ‘anti-racist is a code word for anti-white’?

As a politician with a senior post in a party, she should be aware that she will be (rightly) under public scrutiny. Yes, we would not expect someone in her position to be tweeting this kind of thing – whether the picture is inherently racist or not - or to be referencing rape and kidnap as ‘humour’.

For Ms. Evans information, unlike Presidents Bush, I do not and never have supported the Taliban.