The protest you are not allowed to see 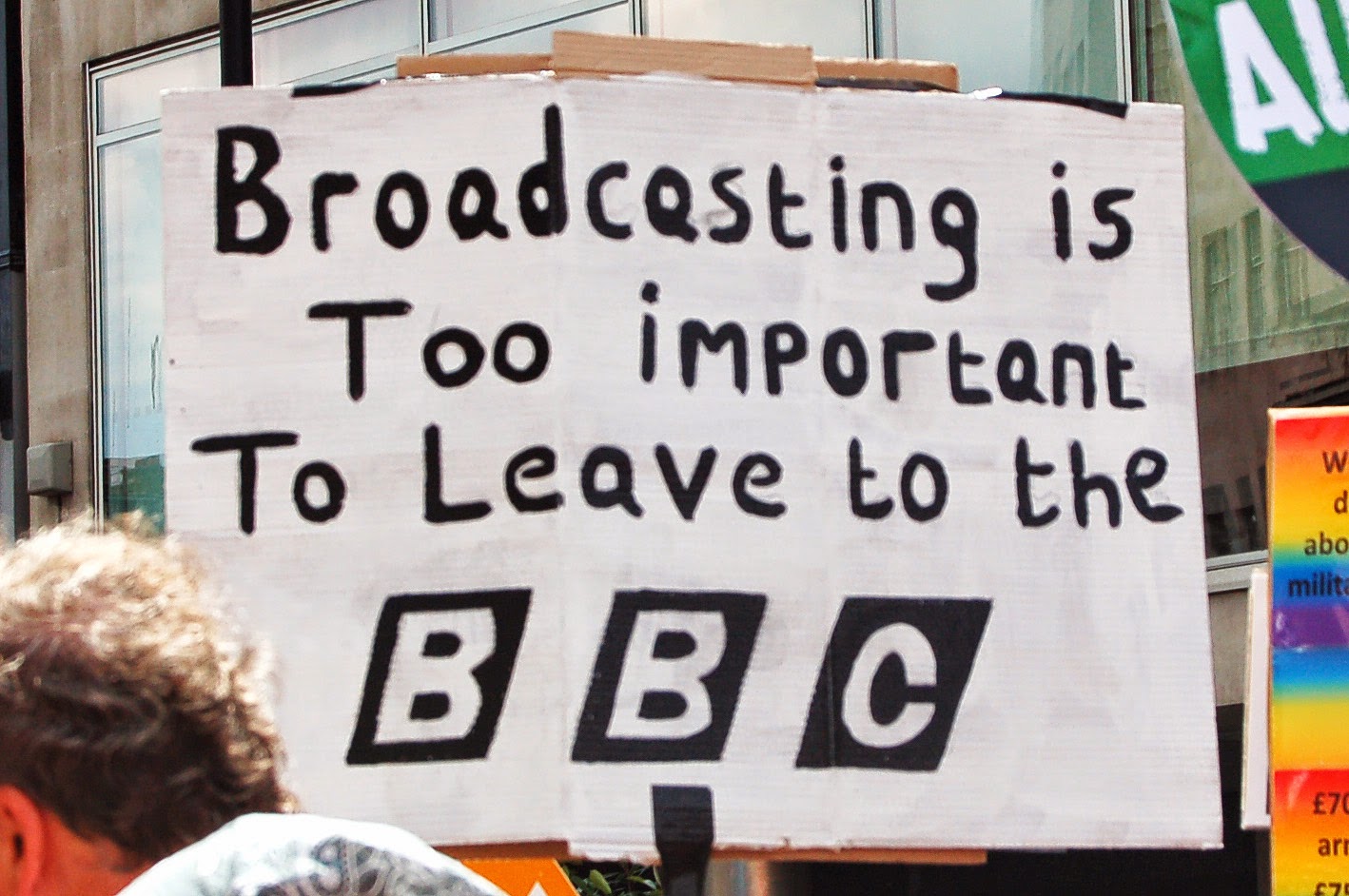 Yesterday I was one of the 50,000 people who marched through the centre of London, from the new BBC Broadcasting House, down Oxford Street, through Trafalgar and Piccadilly, to a rally in Parliament Square. We listened to short speeches from Owen Jones, Caroline Lucas, Mark Steele, Francesca Martinez, Len McCluskey, Diane Abbott, Jeremy Corbyn, Matt Wrack and Russell Brand.

But you probably don’t know anything about this, as the protest was not reported on the BBC, ITV or Sky. It was only on Channel 4 News and reported by Russia Today. The Guardian website reported it, but in common with every other major newspaper, The Observer did not run the story.

The BBC obviously had forewarning that the protest was taking place. Note the extra heavies, and the fact that the plaza in front of the BBC was closed off. Yet no reporters, no camera crews, nothing. 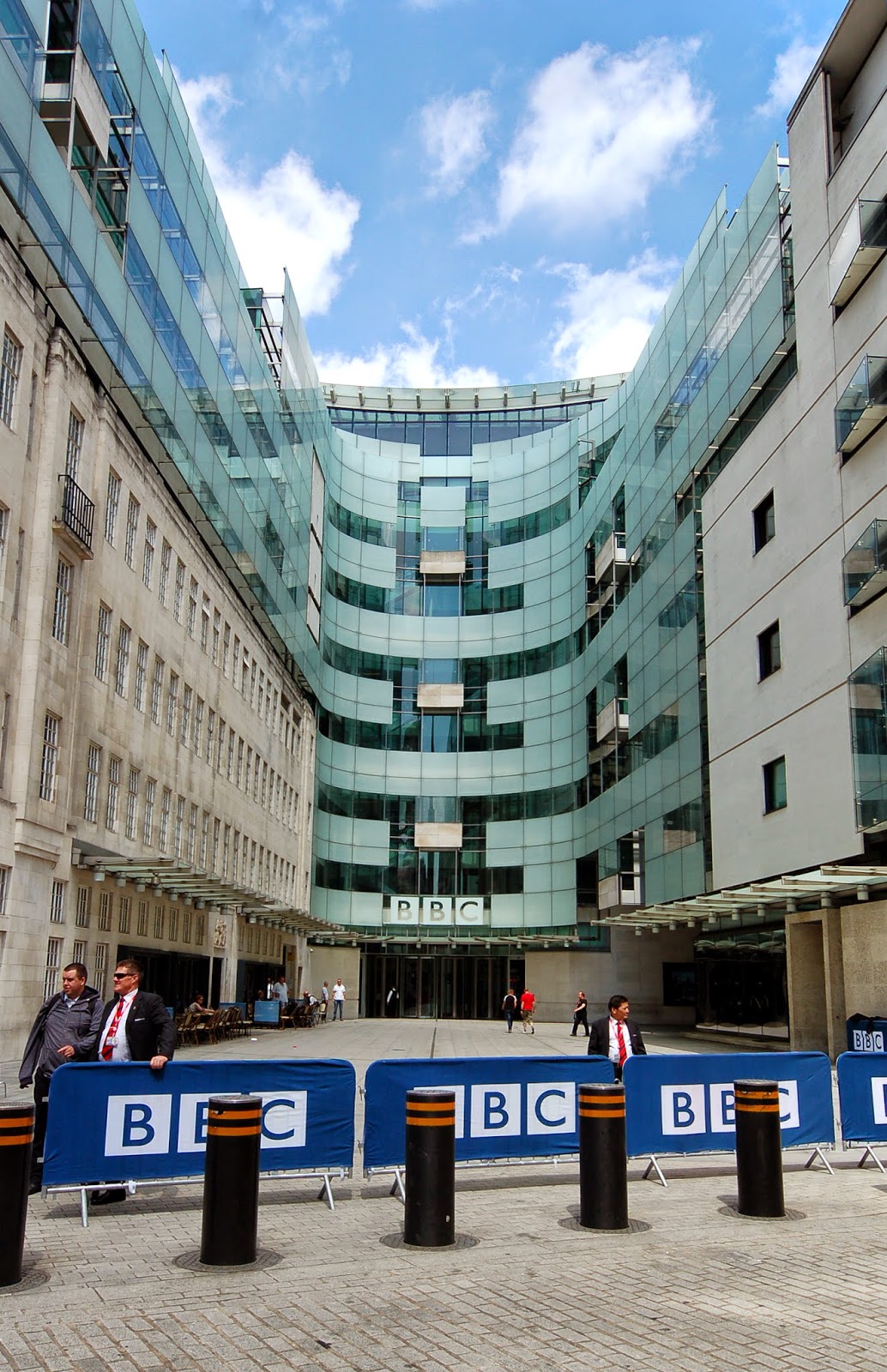 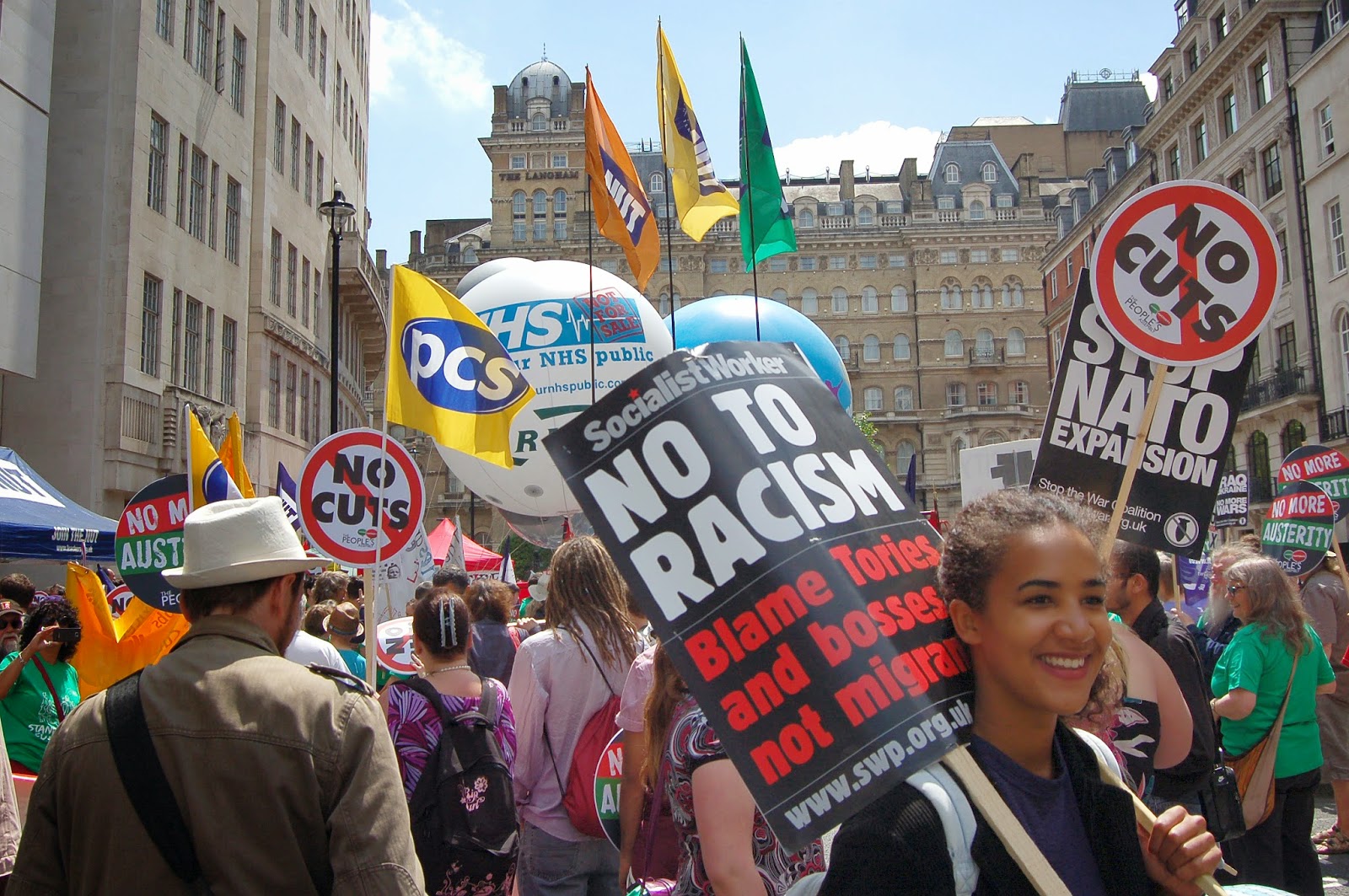 The building on the left in this photo is the BBC. They would have heard the speeches, seen the banners and the people - all they had to do was stick a camera out of a window.

I took a camera because I wanted to blog about the protest, what was said by the speakers, spread the message. I didn’t know that once again, I’d be writing about BBC bias and control of the mainstream media by the government.

The protest was one of the biggest I've been on, and was supported by a wide selection of trade unions, lobby and pressure groups and thousands of ordinary people who belong to none of the above, but just turned up to protest, with the idea of making their voices heard.

Or so they thought.

The problem with our media-saturated society is that (in a twist to Baudrillard) if something isn't reported, it didn't happen. It isn't so much the media report supplanting the reality, it creates the reality. By running a media blackout, the effect of the protest is practically and easily negated.

To an extent, the fact that the protest was not reported by the papers can be understood as they all have a particular ideological slant and political affiliation. But the BBC is a public service broadcaster, not supposed to have any bias whatsoever. Clearly in this case, the editorial decision was made in advance not to cover the protest at all. If not bias, what legitimate reason could there be for this?

The March
It was a very hot and sunny day yesterday, and the marchers were in good spirits; a good atmosphere right from the start. Whilst marchers continued to assemble, some of the speakers addressed the crowd - however I couldn't tell you who was there and what they said, as a police helicopter came in and hovered over the stage for some reason. 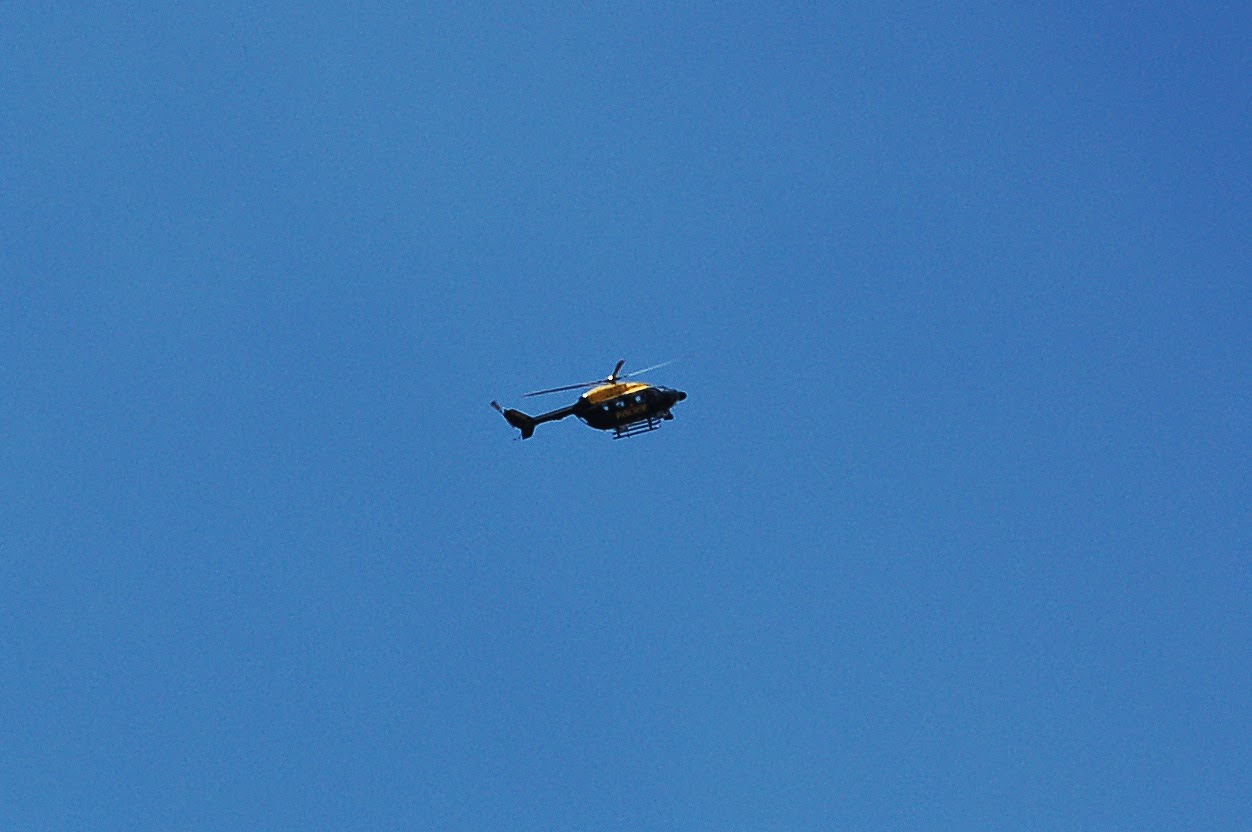 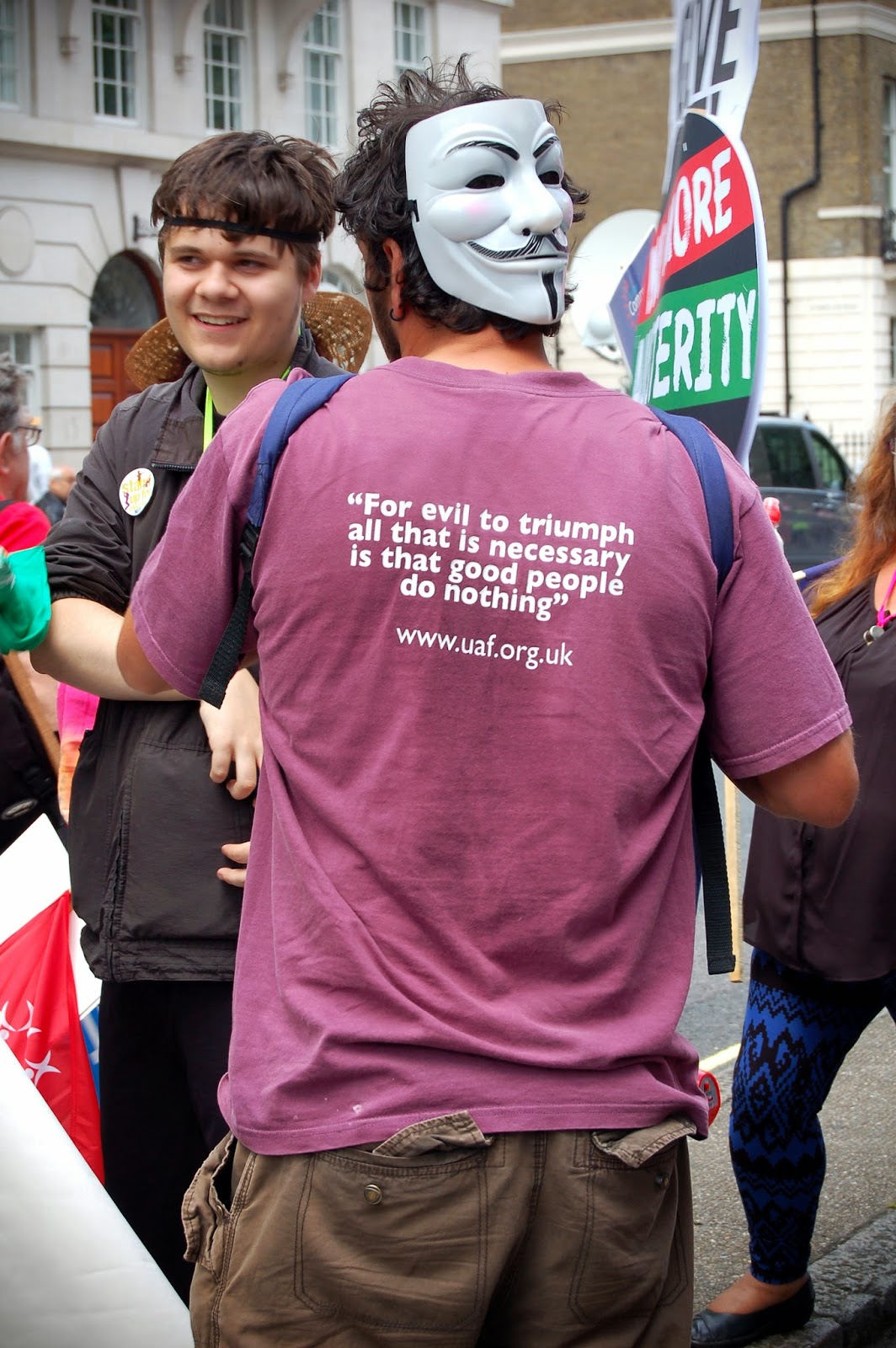 We set off and kept a good pace. I couldn't find the Green Party or UCU so ended up marching with comrades from the NUT. The hundreds of police lining the route had done a good job at stopping the traffic and closing all the roads, so there were no choke points. 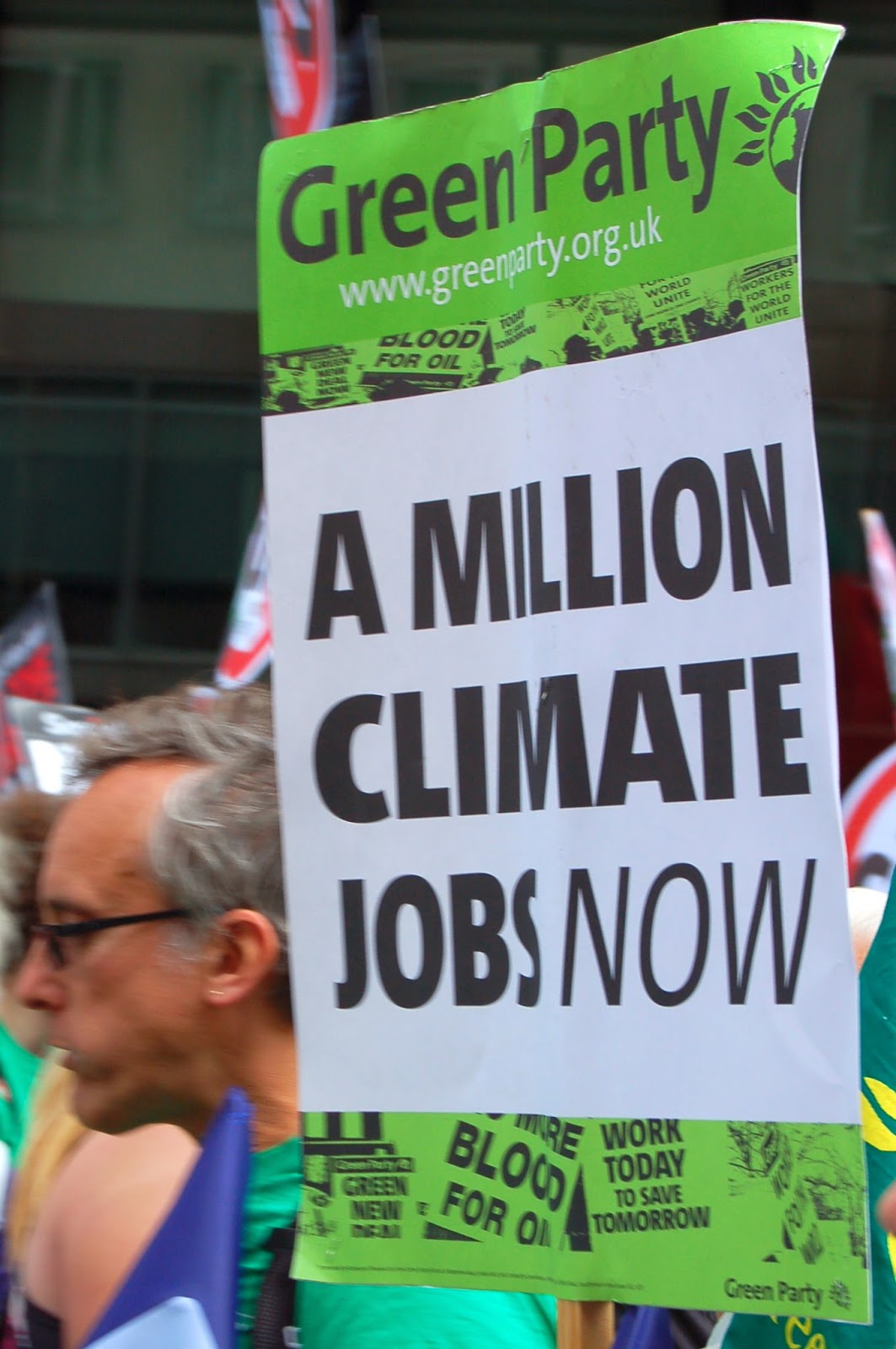 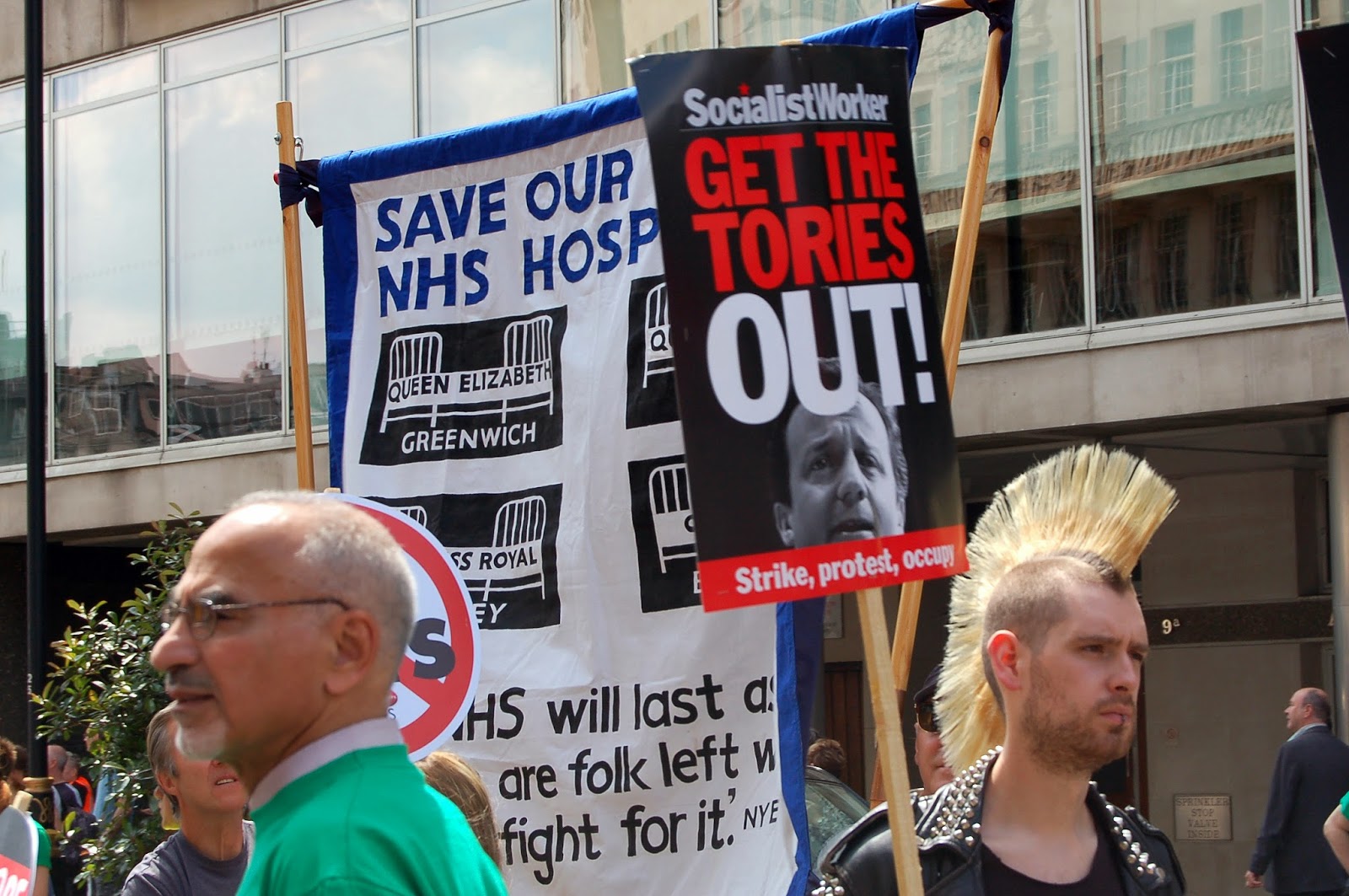 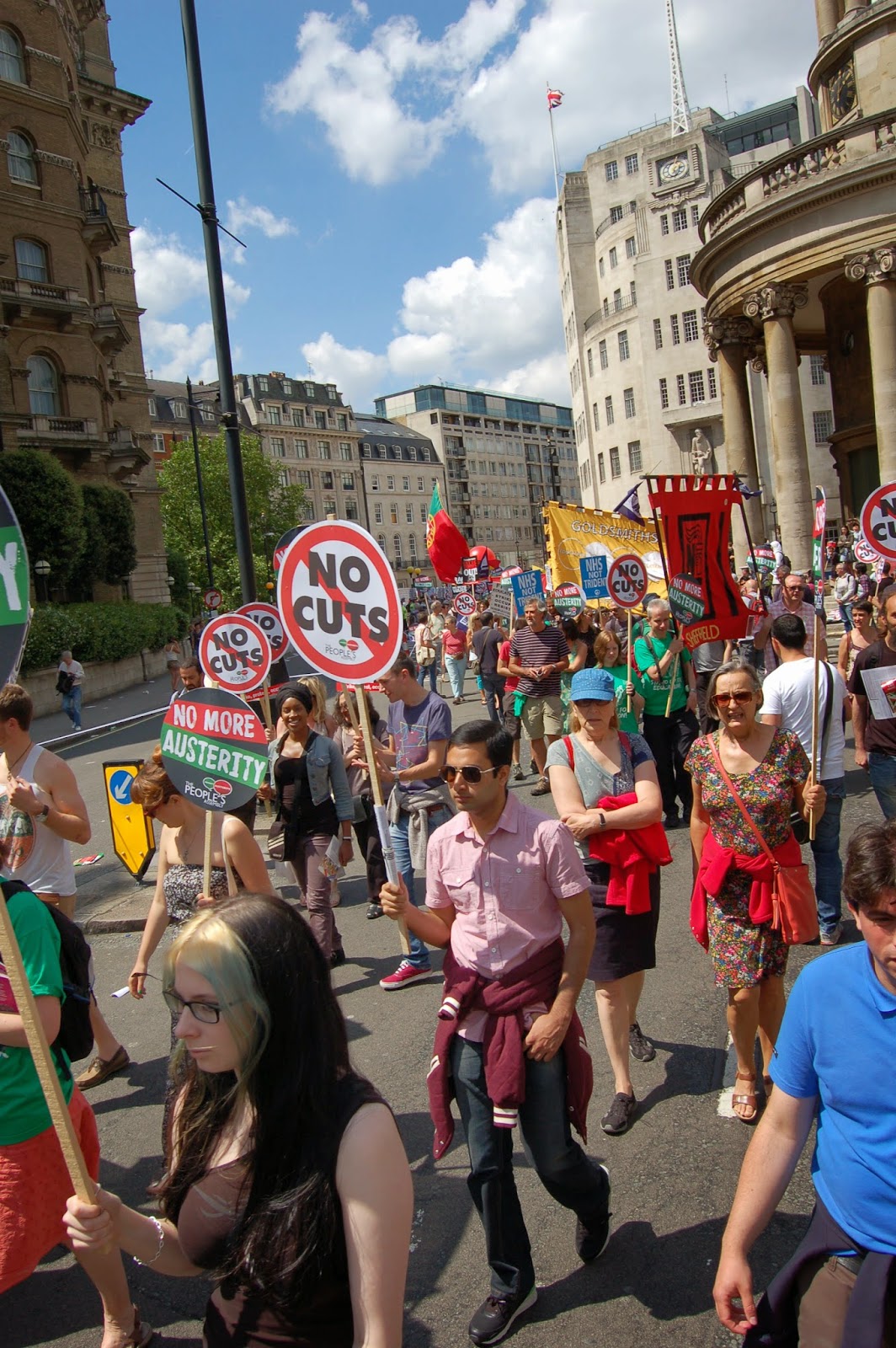 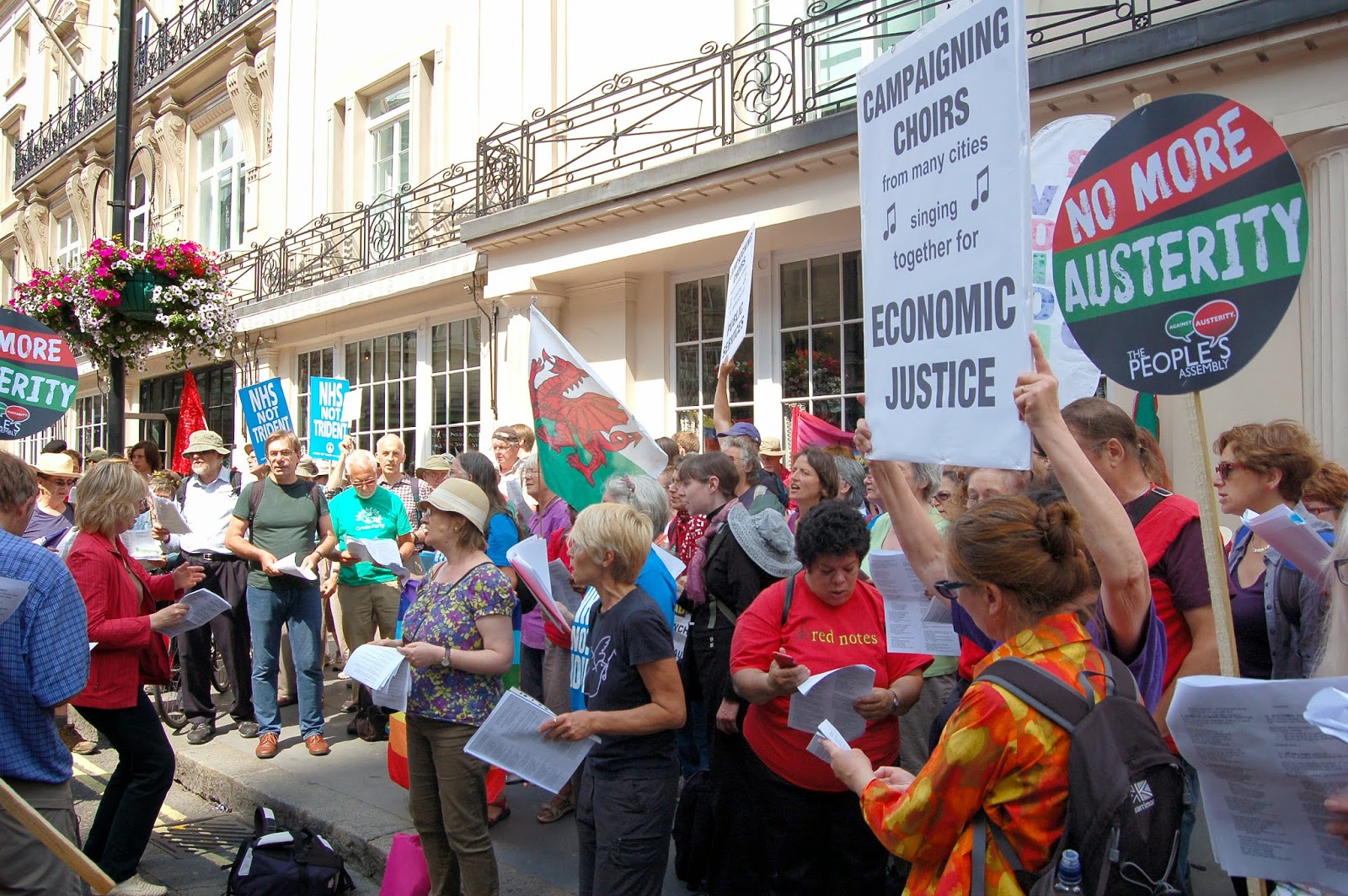 All of Parliament Square had been stopped to traffic, which was good given the number of people who eventually squeezed into it. 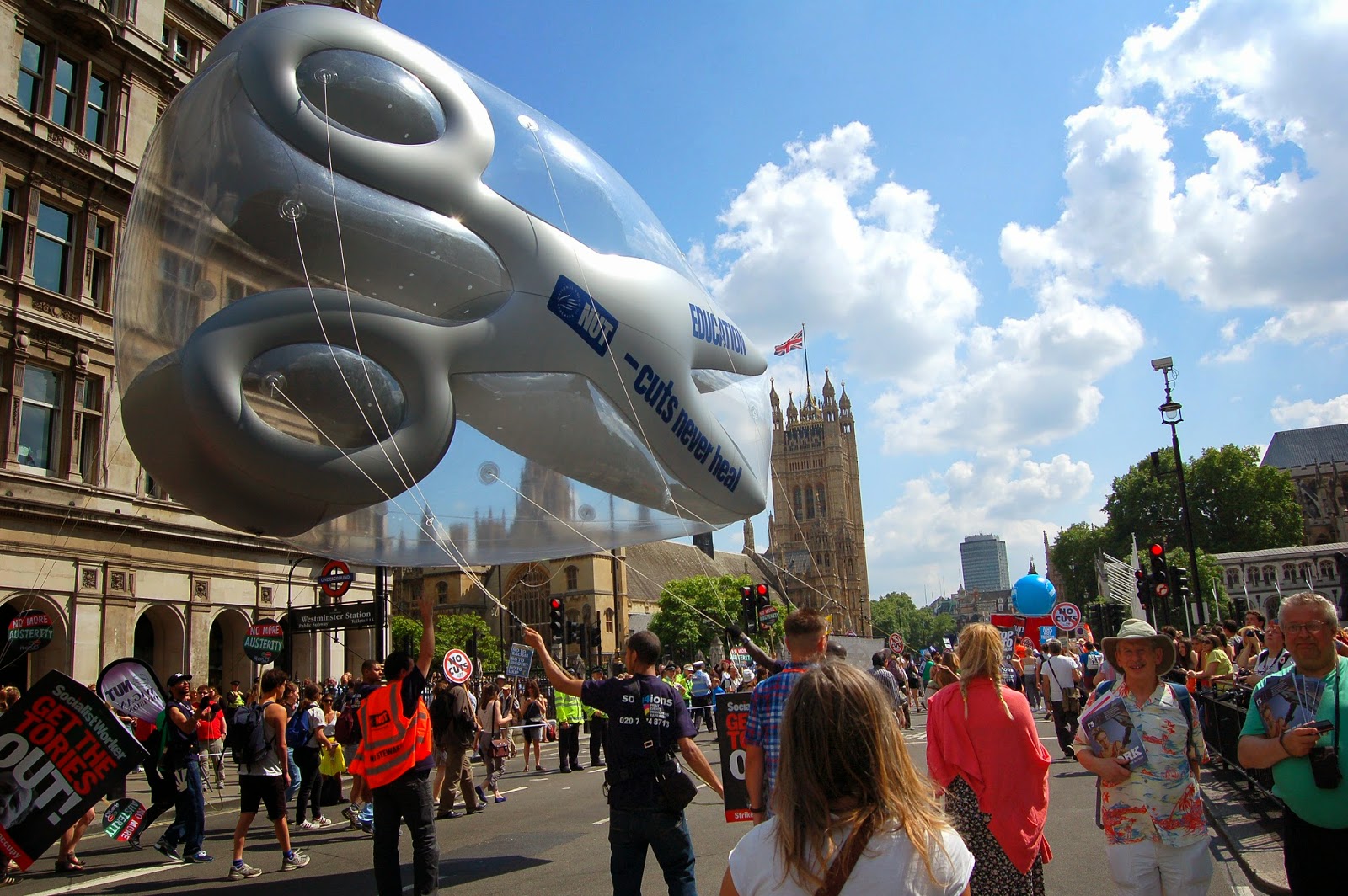 The speakers started off with Owen Jones, who gave a real old-fashioned tub-thumper of a speech. A line that stuck out in my mind, and I tweeted at the time, was that as a growing part of the population were disenfranchised by the major parties and were suffering under the austerity measures, they were losing hope. And this loss of hope had lead to the rise of UKIP.

All the speakers underlined the themes of the protest, why all these groups had come together in common cause: 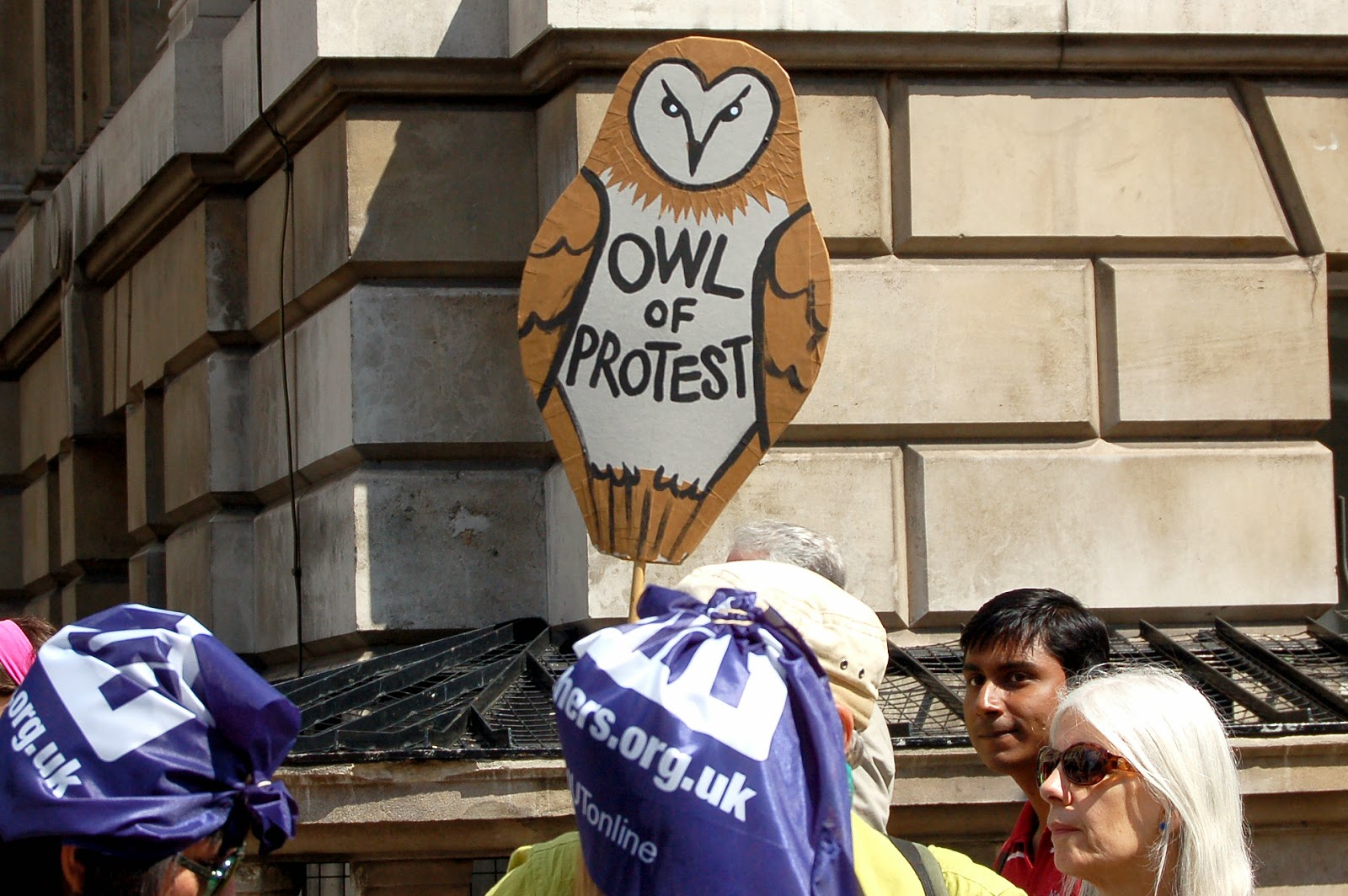 Miliband came in for particular criticism from Abbot, Corbyn and others over his 'youth tax' and pandering to the fabled 'middle-ground' of dissatisfied Tories instead of  arguing for principle and supporting his base. There were 50k of his base outside Parliament right there, and all of them were against this. Miliband may just have made himself unelectable and alienated many more people than he could have ever gained.

Green Party MP Caroline Lucas received a raucous welcome and seemed almost overwhelmed by the response from the crowd to what she had to say, one of those being support for a Robin Hood tax.

The best speech of the day in my opinion was given by comedian and writer Francesca Martinez.


Francesca was also interviewed by Channel 4 News - obviously what she has to say is irrelevant as far as the BBC is concerned.

Later on, Russell Brand showed up. Personally, I'm not a fan. Nevertheless, if his celebrity value gets more people interested in the cause, then I'm not going to knock it. 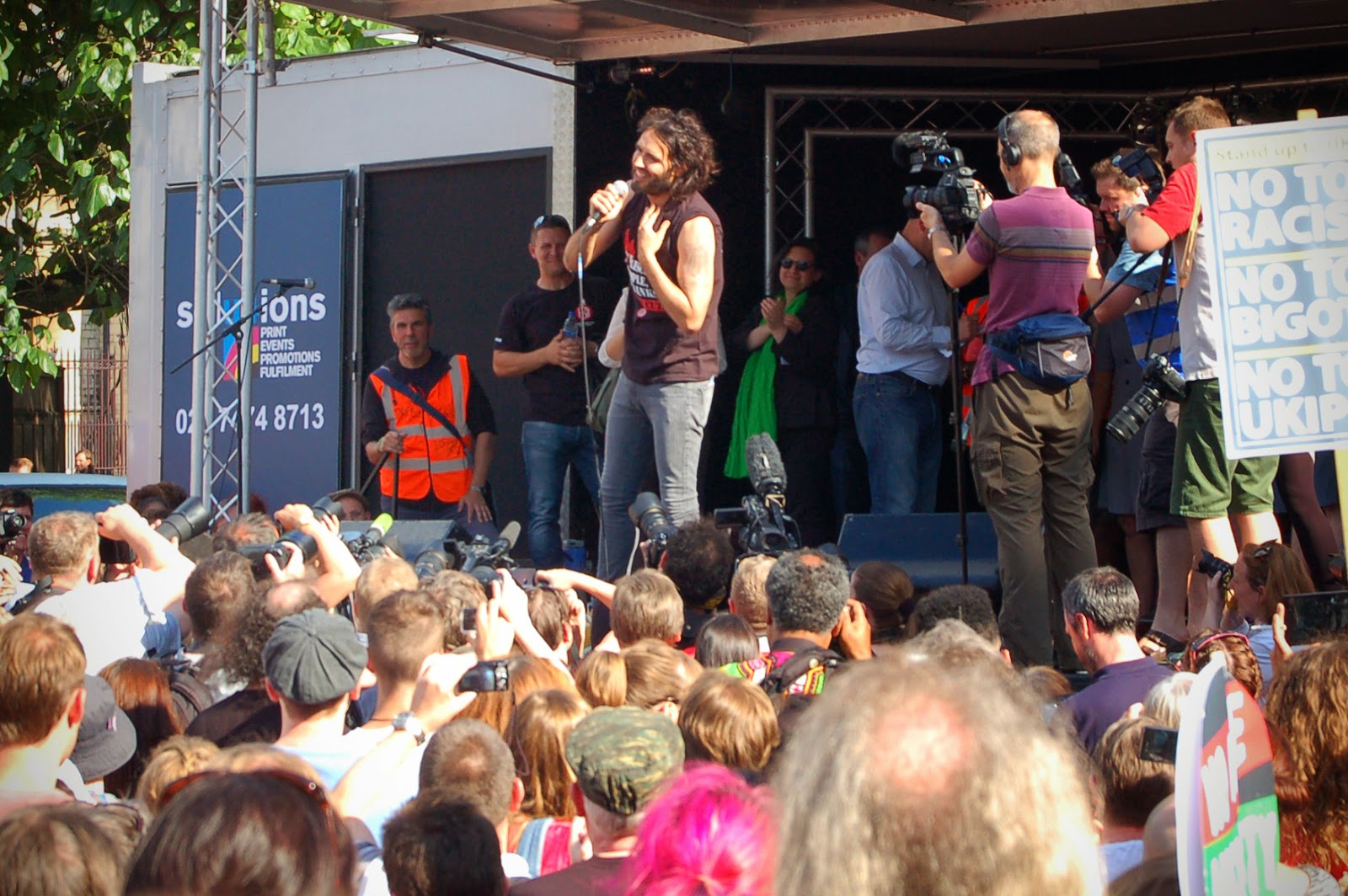 And the fight continues.

The government and corporations may have almost total control over the mainstream media, but we can't let them win. We have social media, and we have ourselves. Everyone who was there yesterday can go back to their communities and spread the word, so even if we are censored they can't stop us from talking, from fund-raising, and ultimately from voting.

And as far as the BBC goes, the broadcaster we all own? 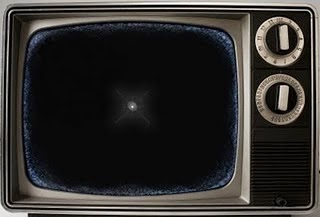 28 June - Owen Jones takes the BBC to task on indefensible bias and censorship: