Tories out! Corbyn in? 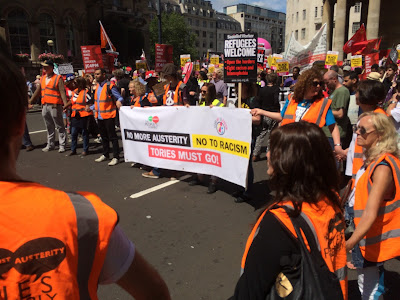 I went to the emergency demo in London yesterday, organised by the People’s Alliance and Stand Up to Racism, entitled ‘No More Austerity, No to Racism, Tories Out.' We ran a subsidised bus from Cambridge from our local SUTR group.

There weren’t many Greens in evidence, and as the demo went on I felt more and more uncomfortable with the whole thing. Before the start, chants were practiced, but as well as the usual pro-refugee and anti-racist chants, were ones explicitly for Corbyn.

This isn’t unusual and as at other recent protests, there was a big Momentum presence. But the difference this time was that the chants were being initiated by SUTR and PA. A lot of the placards had nothing to do with the published aim of the protest, and everything to do with Corbyn. 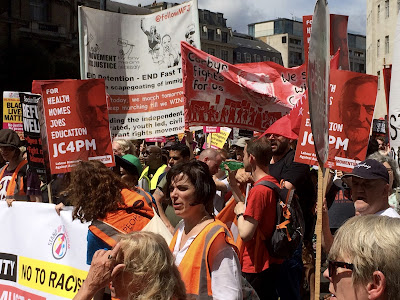 I walked the protest route carrying a PA placard, mostly with my union (UCU) as I lost the Cambridge group – there were 4-5,000 people on the demo. I was at the front of the march when it reached Parliament Square for the rally.  The first speaker was a Labour councillor, which was fine, until the talk became all about Corbyn and his message to everyone on the demo.

And that’s when I walked off.

I’m not a member of the Labour Party. I do feel strongly about the disgusting treatment that Corbyn has received from the BBC/MSM and his own parliamentary party, but aside from the wider issues of media bias, corruption and attack on democracy – and how these impact on all our lives and politics - I’m not involved. There are reasons why I’m not a Labour member and the current mess illustrates many of them.

I went on that demo to support the aims laid out in the title, not to campaign for one of the candidates in the upcoming Labour leadership election.

Both UAF/SUTR and PA are supposed to be non-partisan organisations. David Cameron is a member of UAF(!); the Green Party are signatories to the People’s Alliance charter. If these organisations morph into another manifestation of Momentum then people from other parties (and none) will feel excluded.

The Green Party is currently being encouraged to start work building a ‘progressive alliance’, but this looks increasingly less likely to get off the ground if the groups that we have supported and campaigned alongside in the past are explicitly backing one part of the Labour Party, and using joint protests and actions as a vehicle to campaign for that part.

Obviously if the Labour Party adopted the policies that Corbyn supports, they would be much closer to the Greens and so it would be easier to campaign alongside them. But it's not up to the Greens to choose the next Labour leader, and if we're asked to support a demo, it shouldn't be with an ulterior motive.
Posted by Mick at 15:08