Vote Remain - to save our society 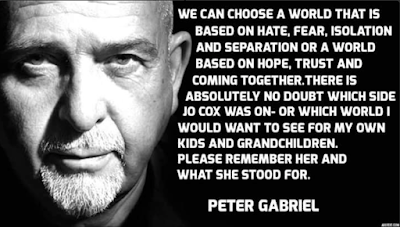 I'm writing this blog entry as a letter to you all, personally, as the choice that faces our country this week is one that may have shocking consequences for our society and we all have a responsibility to ensure that we don't throw away all the progress we have made in recent years. We cannot sit idly by while our society is surrendered to the politics of division and hate.

The country was shocked and appalled by the murder of Jo Cox MP. That event has changed the EU debate, and despite any attempt to the contrary, this referendum will pass into history as resulting in the assassination of an MP who campaigned for Remain and was an outspoken advocate for refugees.

As I write this, right wing Leave campaigners and the press are spinning the ‘mentally ill loner’ narrative as they always do when a terror suspect is ‘the wrong colour’.  What is undeniable at this time is that this was a political assassination. Witnesses heard the perpetrator shouting ‘Britain first’ and when the suspect appeared in court, he refused to give any other name than ‘Death to traitors, freedom for Britain.’ 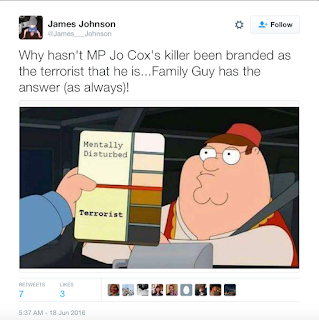 Any mention of the name of Jo Cox in relation to the campaign is being jumped on as poor taste or making political capital from a tragedy. But this was a political act of terrorism, and this MP died for her beliefs. If anything, surely her voice should continue to be heard and those figures from all sides of the debate who eulogized her so well must listen again to her point of view and truly recognize what she stood and ultimately died for.

It was a political act, and the reticence in recognizing this fact in the UK is not being reflected in other parts of the world and in foreign media – French and Spanish news media made the link immediately. It has also been acknowledged by foreign political figures; surely the most loathsome of these is Marine le Pen. Le Pen, who was invited to the UK by former UKIP MEP (and now ally in the EU parliament) Janice Atkinson for the Vote Leave campaign, sought to justify the murder. 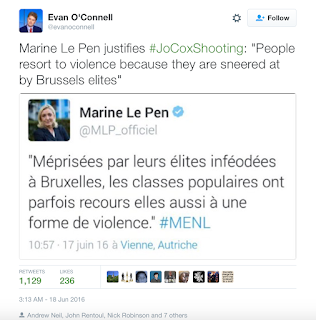 The #Brexit campaign has been quite deliberately focused by UKIP and then Vote Leave on one issue – immigration. The rhetoric has been unrestrained, UKIP continuing to plumb new depths and being quite explicitly, unashamedly, racist. A poster was revealed by Nigel Farage just before Jo Cox was attacked – a poster that has been widely condemned and even reported to the police for inciting racial hatred. It bears an uncanny resemblance to actual Nazi propaganda footage. Yet Farage defends his campaign and continues to be feted by the press and broadcast media as if this was normal and perfectly acceptable. 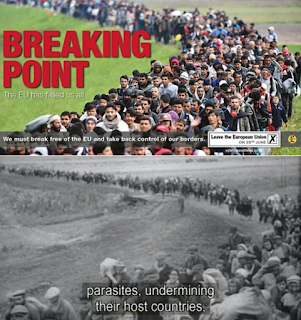 UKIP has done this in order to capture the votes of an aging demographic, both old-fashioned Tories and alienated traditional Labour voters. It has fostered a myth of mass migration – and it is a myth – that once internalized becomes part of the identity of their supporters. No amount of facts will ever convince such true believers to change their opinions, as it quite simply is no longer an opinion. It is no coincidence that UKIP get most of their support in places where the proportion of migrants is far below the national average – the believer has no personal experience of the issues they claim are the perfectly rational justification of their standpoint.

In the past week there was a man from North London on Question Time who said that he was unable to get a doctor’s appointment, yet all the GP surgeries in his neighbourhood - including one only a few hundred yards from his front door – are advertising for patients to sign up. On the Today programme, Leave voters from Sunderland quoted the same tropes, but when challenged admitted that they themselves had never experienced any of these problems. “It’s not here, it’s down south,” they said.  On another day, Today interviewed factory workers on a production line down south in Dover. One woman repeated the same arguments, almost verbatim. But when the interviewer pointed out that the man next to her was from Latvia, she said. “Oh it’s not the workers that are here now – they’re brilliant – it’s the others.”

The myth has been internalized to the point that it has become a defining factor in the believer’s own concept of identity. It is a fundamental truth that cannot be contradicted even when shown to be false. At best, when presented with the truth, the believer will experience a kind of cognitive dissonance before abandoning all pretense of reasoned argument to return to an emotional justification for their position.

This is at the heart of the disdain for ‘experts’ and facts that has been popularized recently by the Leave campaign. As independent expert opinions come out in favour of Remain, the facts they present are no longer engaged with or even argued against – they are simply dismissed and ignored. The very qualifications of the authorities in these fields is used as a justification to doubt their credibility.

There is real fear about what will happen if Leave wins and the far right takes that win as a mandate and justification. We have already seen a resurgence in racist attacks across the country (not ten minutes ago as I write this, a group of Asian men were verbally abused in the street outside my house). Last week when I was campaigning for Remain, a Polish man was too afraid to put a poster in his window – in central Cambridge.

This referendum was never about the EU. It began as an election pledge by Cameron, the sole purpose being to unite his party and claim back votes from UKIP. It very quickly became a vehicle for a coup within the party. Opportunists - some of whom in the past had been in favour of the EU – used the campaign to their own ends. UKIP has always exploited xenophobia and a fake nostalgic jingoism, and were allowed by a ratings-hungry BBC and the right-wing press to set the agenda. The official Leave campaign was then forced to follow suit. All the while, pro-immigration parties, such as the Green Party, were not even allowed a party political broadcast.

Quite simply, the referendum on Thursday is about the future of British society, and how we relate to each other and the world. The progress we have made even in my own lifetime in equality, in human rights, in building a multi-ethnic, multi-cultural society has been extraordinary. Now through the vanity of some and the bigotry of others, we stand on the very precipice, in real danger of throwing this all away, gifting political and cultural power to fascism and hate, in some twisted parody of history replayed.

There are perfectly good reasons why some of you would vote for Lexit – and if this referendum was truly about these issues I would be seriously considering how to vote. But the referendum was never about the EU, and now in the week of the vote, the issues have been simplified - what kind of society do you want to live in?

Which Britain do you want to wake up in on Friday morning?

So I’d ask you first of all to MAKE SURE that you vote on Thursday as every single vote will count, and I would also ask you to vote Remain even if you have to hold your nose to do it. The future of this country is at stake, and if Leave wins, there will be no way back.

Thank you for your time.