The Silencing of the Lambs - the War on the Peace Campaign 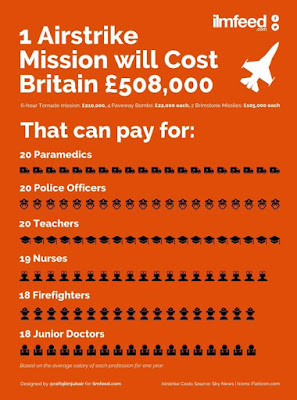 Over the past couple of weeks there has been a deliberate campaign to discredit peace campaigners and lobbyists, the like of which we haven’t seen in recent years. Even the Iraq War did not elicit the kind of relentless vilification of protestors currently published in the mainstream media, the BBC and on social media. Anti-war campaigners have been accused not just of being appeasers or cowards as in the past, but bizarrely, supporters or sympathizers of armed conflict – of being ‘terrorist sympathisers’ by none other than the Prime Minister himself.

There is one campaign but there are two agendas at work behind it. In some ways the motivations interlink, but the emphasis being given to these ends is different in both camps.

On one side, there is the government propaganda campaign. Designed simply to support and justify the illegal action in Syria - though even government ministers only months previously were themselves arguing against it, the Foreign Affairs Committee advised against it, as well as former diplomats and military commanders. We’re still waiting for Chilcot, but here again was another ‘dodgy dossier’ claim of ’70,000 Syrian freedom fighters’ ready to dash into action as soon as they saw the RAF roundel overhead.

There simply is no logical, political or military reason why the military action was extended into Syria – where other countries are currently bombing all the different factions with little or no coordination between them. There is no end strategy, no exit plan, no cohesive mission, and as for targets – what solid infrastructure and assets ISIS/ISIL/DAESH/IS has displayed, have already been long-since obliterated. The US even commented on how pointless the addition of our aging aircraft was to any military strategy. On top of that, every bombing raid is costing somewhere in the region of £0.5m, when we have record numbers of children in poverty and chronic underfunding to social services and the NHS.

We don’t know why the government is hell-bent on war, though there are the usual reasons: the excuse to wind-back human rights; force through draconian laws; divert from mismanagement of the economy or other agendas; boost profits for the arms trade; the promise of eventual carpet-bagging (a seat at the table) of what’s left when it’s all over. In the absence of a solid reason, propaganda and fear-mongering are used to create one. Terror plots with no arrests, charges, evidence etc. are cited. Government initiatives like Prevent and ‘leaks’ to the tabloids are used to create fear and suspicion within communities – and we have seen the rise in racist and islamophobic attacks that have inevitably followed.

It does not suit the government for organized anti-war campaigners to be protesting, fact-checking, countering the propaganda with independent and foreign media sources and lobbying their MPs. For this reason, they have sought to close down the debate, claiming victimhoodfor MPs, demonizing peaceful protest, equating the peace campaigners with the enemy.

This isn’t necessarily new if we look at the history of peace campaigns even in the UK, except this time in its vitriol, relentlessness and resulting actual threat to democracy.

Inevitably there will be, as there are in every movement and attached to every medium, those trolls and fervent tribalists who will go so far as to seek to intimidate rather than argue, to bully rather than lobby, and there are laws and safeguards in place to deal with that minority. But what we are seeing here is the exploitation of that minority to tar the entire movement, and the validity of the argument

On the other side however, we have a group whose only concern it seems is to continue to personally destroy the Labour Party leader, Jeremy Corbyn. He is a life-long peace campaigner, until recently Chair of the Stop the War Coalition – instrumental in organizing the biggest public demonstration in British history. Now he is a ‘terrorist sympathiser’, tantamount to a fifth columnist, even being called a ‘fascist’; a ‘threat to security’ presenting a ‘clear and present danger’. This is being propagated by a faction within the parliamentary Labour Party, who in contempt of the party membership, their own constituents and Labour voters want to usurp the leader and recreate the party in their own image. Whether deliberately or through sheer ignorance, these figures are being courted by the BBC and MSM as this suits their and the government’s agendas. An effective political opposition to the war cannot be tolerated. And therefore it must be discredited and suppressed. 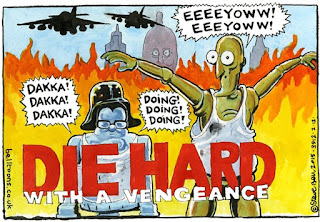 The figurehead of the Syrian War is curiously not Cameron or any Tory politician. It is Hilary Benn, Shadow Foreign Secretary. Cited as being the greatest political speech in modern times, his drumbeating patriotic polemic made Tories leap to their feet in applause, and swayed some of the MPs in his own party away from the wishes of their constituents and into the government lobbies. I don’t know what camp Benn is in. He’s been wrong about every single military conflict from Iraq onward. The speech itself was a travesty, re-writing history, painting parliament as the defenders of good against evil, forgetting perhaps not just our appeasement but deliberate establishment and support of fascist states across North Africa, South America, Arabia and the Middle East (and let’s not even mention the crimes of empire). Whether deliberate leadership challenger or naive government and MSM shill, the damage he did was devastating.

Today it was announced that Green MP Caroline Lucas was ‘distancing herself’ from the Stop the War Coalition, and the timing could not have been worse. Now her action and the statement released to justify it is being used by these very factions to further attack the movement, the antiwar case itself and Corbyn in person, and this just days before a mass rally in London.

CORRECTION 12/12/15 - It turns out that Caroline's resignation was used by the MSM - she stepped down weeks ago. The 'statement' wasn't a release but in response to media questions. However, this didn't stop figures even within the Green Party from also using the story to attack Stop the War Coalition in support of pro 'humanitarian bombing' and pro-regime change Syrian groups.

It appears the Green Party has a hawk, seemingly believing that insisting on the primacy of international law and learning the lessons from Iraq and Libya display a 'failure to think'. 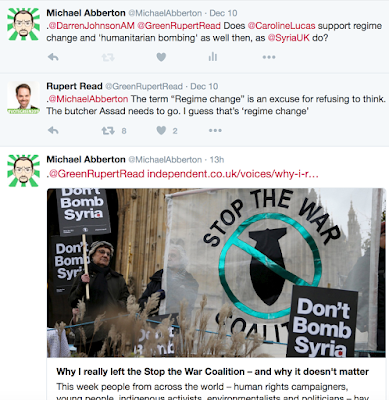 At the same time, we have the victory of the FN in France, a country still under martial law in all but name, where the state of emergency is already being used as to curtail human rights and silence dissent, alongside the threat of increased surveillance of its citizens – where those citizens now most under threat of attack are Muslims. In the US, Donald Trump makes one of the most outrageously racist statements of his controversial campaign, demonizing all Muslims, whilst at the same time, islamophobic attacks in the US and UK are massively on the increase. A man who tries to murder a Muslim woman by pushing her under a train isn’t a terrorist – but a mentally-disturbed man attacking a busker in a tube station is – because he mentioned Syria.