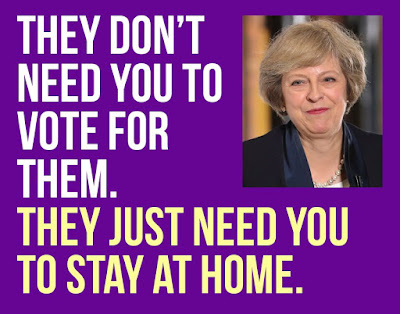 Our democracy is under direct threat. This isn't another conspiracy theory or a rant built of the frustration about the mainstream media deliberately not covering tory election fraud, or money laundering, or the revelations about the misuse of social media and metadata by government and private corporations. This is about the latest corruption of the democratic model. Campaigning to get people not to vote - whilst at the same time using fear to ensure that enough of your core voters do vote for you to win.

This technique has been used in the Trump and Brexit campaigns, and ensured that Le Pen got to round two of the French presidential election - and a last ditch attempt to discredit Macron only failed thanks to strict French election laws and largely independent media.

It is an evolution of the established ad hominem attack, but goes further than before. It does not rely at all on debate or defending policies to win over voters to your side. The policies are merely presented and a controlled state broadcaster or supporting right-wing media will not challenge them in any respect. It does not expect or require any defence of policy, any presentation of facts or ideology. The heart of the democratic principle, the debate in open forum, has been entirely removed.

Argument and dissent is not only discouraged but entirely eliminated. But even further than that - the dissenters arguments are dismissed before they even take the floor. Experts are denigrated and despised simply for being experts. Scientific fact is dismissed as conspiracy theory. The opposition to the beliefs imposed upon the collective, the revealed ‘truth’, are branded traitors or saboteurs.  The purveyors of falsehoods become the truth-talkers, whilst objective truth becomes ‘fake news’ - an epithet that instantly obviates any rebuttal.

If you compare the recent campaigns to those of twenty or even ten years ago, you won’t see this phenomenon to be so pronounced as it is today. Think back for a second to the arguments that surrounded the first televised debates, between JFK and Nixon, to the argument against televising parliament. The counter-arguments have not only been fully vindicated, but they never managed to envision the degradation of the democratic process that 24-rolling news and social media have brought to the mix. Debate has entirely gone. There is no negotiation, no considered argument, no foundation in statistical or other truth. It is all point-scoring soundbites, slogans delivered to the baying mob of party faithful, who truly believe; based on their own perception of constructed identity rather than any objective, rational argument.

Recognising this to be the case, the shrewd political campaign guru knows that unpopular policies will never win over the other side - as they are by nature contrary to their interests and in some cases unsupported by facts or ethically indefensible. So what they must do is convince the other side to simply not vote. Attack the opposition as a person, or to portray them as incompetent or a threat, or as a hypocrite. But the most powerful weapon in their arsenal is to portray them as being fundamentally indistinguishable from their own candidate - to destroy any perception of real alternative or choice. Seeing this, even the most politically active and dedicated opposition voter will simply not vote.

The second stage of the strategy is just as important - get enough of your voters out to win. Believing in the received truth and identifying themselves at a personal level with the policies won’t get them out on the day, especially if they are already convinced that it will be a landslide anyway. You have to terrify them into voting. You do this by equating the opposition with a direct threat to their way of life and that perceived identity.  You say the opposition is a ‘threat to national security’, a friend to the invading horde of foreigners which will either erode our national culture or deliberately act to destroy it. You develop a common enemy, scapegoats, to take the blame for the deliberate ideological undermining of state provision of education, health and social care that the government is currently pursuing or intends to pursue once elected.

The key to winning the modern election is a combination of these two messages - apathy and fear.

Trump lost the popular vote by a huge margin but was still elected into office because his campaign managed to convince enough people in key states to simply not vote. In the Brexit campaign, aside from the straight lies that were told - the tropes that were imprinted so indelibly in the consciousness that they are still being repeated months after they have been irrefutably shown to be untrue - the vote was won by a combination of xenophobia and voter disengagement. Factual counterarguments were dismissed without rebuttal with the mob-cry of ‘project fear’. The racism that was deliberately deployed achieved two things - it built up the fear of the people it deceived to vote, whilst simultaneously convincing others that the country would simply not stoop to that level, further convinced by polling results that the Remain vote was not under threat.

In the upcoming election the same machiavellian forces are at play. People were stunned at the Tory manifesto launch, as it contained policies that seemed to attack the traditional Tory base, and others, like the removal of school dinners, that would never be vote-winners, But that is entirely the point. The manifesto is not there to get people to change their vote - it is to set out a programme for government under a claim of mandate and hence set obligation to support, justifying whipped votes -  to enforce the unity of the Tory party and May's absolute authority should she be returned to rule.

The timing of this election was also cynically set for the same purpose - coming just after local elections, when party resources would already be spent and people would be literally fed up of the never-ending stream of leaflets on the mat and canvassers on the doorstep.

Opposition parties cannot rely on the tactics they have used before as these will simply not work - they don’t have the money, the media or the system to win that way. The only way they can win is to make people aware of this cynical manipulation and to fight it on the ground - and they must do this together, united. Tribalism or traditional party loyalties must be put aside. Differences in policy and approach can be debated -  following true democratic principles - once the threat of a single party far-right government has been eliminated.

So Labour must vote LibDem, LibDem must vote Labour, and the Greens must stand down in every Tory marginal. The SNP should stand unopposed. Let’s have the debate on government and policy in the place that was designed for that purpose, on the floor of Parliament. And we must get every voter into the polling stations, telling them that their votes do count - and impressing upon them that this could be the very last time they get the opportunity to do so.